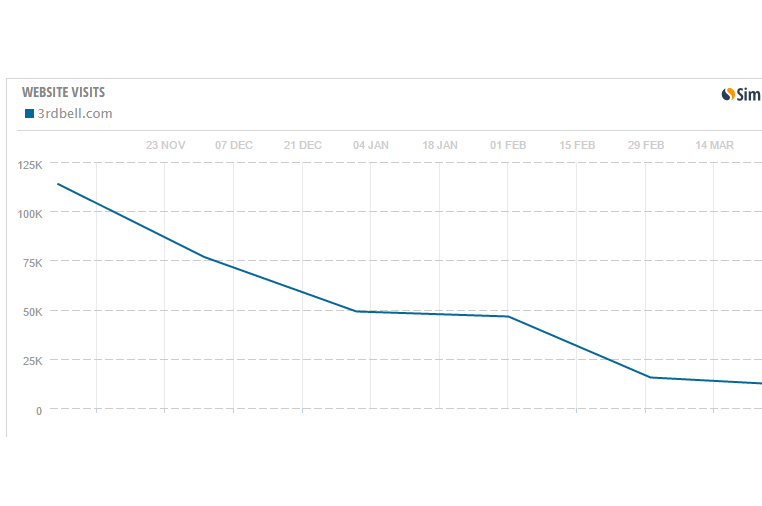 Video streaming site 3rd Bell is experiencing a downward spiral in its user acquisition, according to Similar Web data. The startup’s growth stopped a couple of months ago and now it is going down, fast. 3rd Bell launched in early 2014 and raised an undisclosed amount of funding later in 2015.

After the much-anticipated launch, the startup enjoyed quite a fast growth, thanks to nonstop Facebook boosting. But from November 2015, the site started to see a decline in its users' growth which has plummeted in recent times.

We have seen a sudden proliferation of online video streaming startups in Bangladesh in recent times. At least three companies are competing for our attention in this space. Inspired by the success of Netflix and couple of other startups in our neighboring market these startups aimed to tap the huge TV ad spending that many predict will switch to digital.

However, video is an expensive business. Most of these companies bet against the growing smartphone penetration and assumed that these people will subscribe to their platforms. As I wrote previously, the question remains, will this growing population essentially be watching online streaming given the fact that YouTube hosts almost all Bangladeshi dramas and movies? ost importantly, the market size for Bangla cinema and Bangla entertainment content is not big enough to build a big business. Even though, there is a market probably. But it seems these startups are failing to connect to that.

Bongo BD, another video streaming startup, is also experiencing issues with growth. Bongo’s users' growth remained steadily low for quite some time until the startup started to broadcast ICC T20 matches. But right after the game, growth has plummeted again.

3rd Bell and Bongo started with licensing Bangla content from existing producers and copyright owners, companies like Channel I and Impress Telefilm among others. They have also been investing in original content like Short films, funny videos, gossip news and other short content. However, in the past months, these startups largely failed to break the noise in the market. It seems streaming is a long way to go.

Globally, online video business is hot cake now. Facebook to Youtube, Amazon to Netflix, BuzzFeed to Mashable to New York Times all are investing heavily in video. This seems a perpetual rat race where nobody is winning.

It will be super hard to break the noise in the market unless you do something extraordinarily different which Netflix is doing to some extent with its originals but I doubt our local startups will be able to compete given that you can access Netflix from Dhaka now!