One of the common habits among successful entrepreneurs is reading. In fact, research conducted by Thomas Crowley shows that about 85% of self-made millionaires read two or more books per month. While there's a time and place for leisurely reading, millionaires read books that encourage self-improvement.

Bill Gates, one of the richest men on Earth, is known to be a bookworm. Not only Bill Gates, billionaires including Elon Musk, Jeff Bezos, Mark Zuckerberg, and Warren Buffet are also known to be bookworms. Mark Zuckerberg tries to read at least a book every two weeks. Elon Musk believes that books are one of the reasons behind his massive success.

Among hundreds of books recommended by these successful entrepreneurs, we have selected five books that we believe will help you not only to understand the business better but also to be a better version of yourself.

When asked how he learned to make rockets, Elon Musk, the man behind Tesla and SpaceX, replied “I read books”.

“ZERO TO ONE: Notes On Startups, Or How to Build The Future” by Peter Thiel & Blake Masters is one of the top books recommended by the founder of Tesla and SpaceX. To Musk, this book gives a glimpse of where human civilization is heading.

The massive success of the startup founders of Silicon Valley has sparked an interest in startups among young adults. Peter Thiel, who co-founded PayPal with Musk, is one of those successful founders of Silicon Valley. Thiel along with Blake Masters, a student of Stanford University, collected the class notes of Theil’s Stanford University Class and published them as the book “ZERO TO ONE” which soon became an international bestseller.

In the book, Theil shares his thoughts on startups based on his 20 years of experience as an entrepreneur. Peter Theil reflects on the importance of starting something new rather than following the footsteps of the other successful startups. He also mentions the fact that there is an infinite number of unique ideas and only a few of them are valuable enough to build a business.

In ZERO TO ONE, Peter Theil stresses building monopolies, the fewer competitors you have, the more you will be able to focus on development rather than marketing. According to Theil the seven indicators of a successful startup are:

About the book, Elon Musk wrote: "Peter Thiel has built multiple breakthrough companies, and ZERO TO ONE shows how."

2. Mindset: The New Psychology of Success by Carol S. Dweck

Bill Gates reads more than 50 books a year, which means at least 1 book per week. According to the Netflix documentary “Inside Bill’s Brain”, Bill Gates can read 150 pages per hour, 15 books in a week with a 90% retention rate. Bill Gates has his own blog gatesnotes.com where he writes reviews on his favorite books.

Mindset: The New Psychology of Success by Carol Dweck is one of Gates’s favorite books.

In this book Dweck divides the people into two groups: Fixed Mindset and Growth Mindset.

The first group of people believes in inborn talent. When parents and teachers praise children for their talent the children tend to believe that they will always have to prove their talent and avoid looking dumb. This mindset makes them avoid taking any risks because of the fear of failure. When children are told “You are not smart enough to do this”, they stop trying to do the task believing that they are not smart enough for that.

On the other hand, people with a growth mindset believe that intelligence is not a by-born quality. It can be developed. This mindset encourages them to take risks or learn something new. Instead of seeing other successful people as a threat, they get inspired.

In the book, Dweck shows how the mindset can play a big role behind someone’s success or failure.

Bill Gates wrote: “The greatest virtue of the book is that you can’t help but ask yourself things like, “which areas have I always looked at through a fixed-mindset lens?” and “in what ways am I sending the wrong message to my children about mindset and effort?”.

3. In Innovator's Dilemma: When New Technologies Cause Great Firms to Fail by Clayton M. Christensen

In Steve Jobs’s biography written by Walter Isaacson, there is a list of Jobs’s favorite books and the only business book in that list is The Innovator’s Dilemma by Clayton Christensen. According to the biography, this book deeply influenced Steve Jobs.

In The Innovator’s Dilemma, Clayton Christensen shows how the best managers of a company can lead the company toward the edge of the cliff by following traditional business practices. The writer has provided data to support this statement. The author suggests in the book that a manager should know when to abandon traditional business practices and leverage “Disruptive Innovation” that can change the market scenario entirely.

One of the main reasons Steve Jobs was exiled from Apple Inc. and John Scully took over was, prioritizing profitability over passion. When Steve Jobs took over the company again,  Apple Inc. was only 90 days away from bankruptcy. A group of professional managers led the company to the edge of the cliff by following “Best Advice” and doing the “Right Things”, exactly the phenomena described by Professor Clayton Christensen in “The Innovator’s Dilemma”.

Later the way Apple introduced products that solved the problems of customers they did not even know about, instead of following the traditional way of asking customers, shows how the book influenced Steve Job’s style of running a business.

4. The Hard Thing About Hard Things: Building A Business When There Are No Easy Answer by Ben Horowitz

Hard Thing About Hard Things by Ben Horowitz has been recommended by a number of successful entrepreneurs of Silicon Valley including Mark Zuckerberg ( Co-founder and CEO of Facebook), Larry Page ( Co-founder and former CEO of Google), Dick Costolo ( CEO of Twitter), and Peter Theil ( Co-founder of PayPal).

What makes this book a must-read for startup founders is that this book tells one of the hardest truths about founding startups which is that founding a startup is like walking through a never-ending cycle of euphoria and terror. One moment you find a solution to a problem and the next moment another problem will find you.

Based on his own experience as a businessman, Ben Horowitz stresses the fact there is no recipe for running a high-tech startup and leading the team. There is no recipe to encourage your team when your business is going down. This is the hard thing about hard things. You have to find your own solution in your own way while dealing with hard things like building a company.

According to Larry Page, the co-founder and former CEO of Google, this book is a great read — with uncomfortable truths about entrepreneurship and how to lead a company. It's also an inspiring story of a business rebirth through sheer willpower.

About this book, Mark Zuckerberg wrote: Ben's experience and expertise make him one of the most important leaders not just in Silicon Valley but in the global knowledge economy. For anyone interested in building, growing, or leading a great company, this book is an incredibly valuable resource ­and a funny and insightful read.” 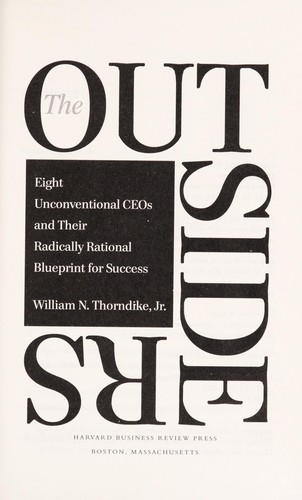 Like many other billionaires, Warren Buffet reads five to six hours a day. But he does not limit his reading in books. He reads six newspapers and 500 pages of corporate reports a day.

According to Buffet The Outsider by William N. Thorndike Jr., is one of the must read books for everyone.

This book tells the stories of eight successful CEOs. The ideas and lessons of the book have resonated so powerfully among CEOs and investors that the book can apparently bring them together in some ways.

Despite not being a huge best-seller, the book has influenced a lot of CEOs and big hedge funds, and private equity-type investors. Warren Buffett, who is featured in the book, called it “an outstanding book about CEOs who excelled at capital allocation.”