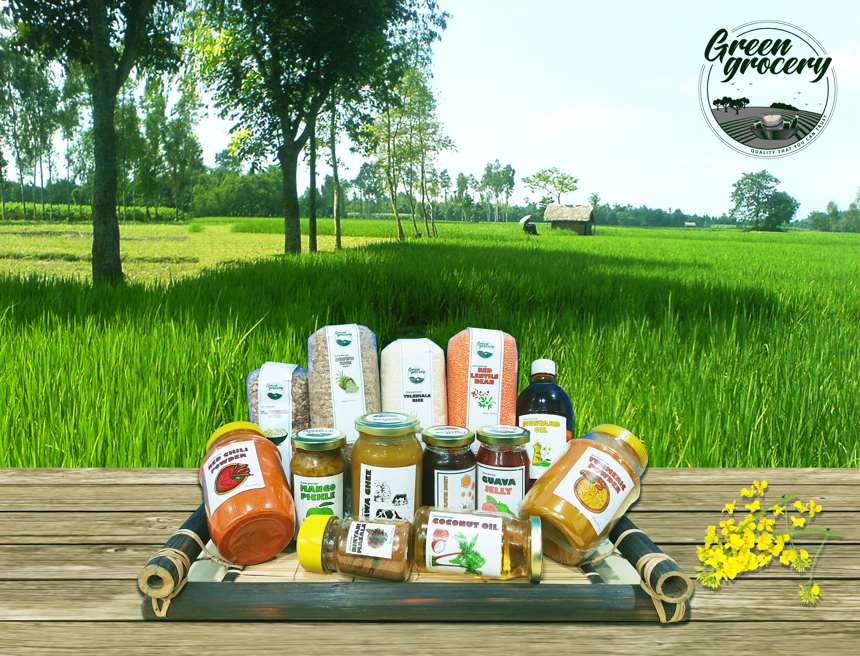 Deliberately small: Quality is a key priority and obsession for Green Grocery. The company does not aim to become the largest player in the sector. Rather it plans to stay deliberately small to have greater control over quality. “If we can serve 5000 families in Dhaka, that is enough for us to build a sustainable operation”, one of the founders of Green Grocery tells FS.

Green Grocery is an online safe food company that sells chemical-free fresh food products which it directly sources from farmers, processes in-house, and delivers directly to customers. The company offers a wide range of handpicked products sourced from different parts of the country including varieties of rice, spices, homemade spreads, brewed oils, ghee, pickle, and much more.

Safe food brands have seen excellent growth in Dhaka over the past few years. The segment has already produced several prominent players. Green Grocery says it has strong differentiation points and aims to elevate grocery products where people will send grocery items as gifts. The company uses beautiful designs and packaging generally reserved for esthetic products to elevate the status of grocery items to lift them out of the mundane.

Green Grocery is a young company, only a few months old. The team, however, has been working behind the scene for a while in R&D, understanding the market, surveying customers, and available brands to understand why people buy safe food.

After much deliberation, the company launched a small operation in June 2020 with some 30 products and a small team of 7 part-timers. A website for customers to place orders and several campaigns on Facebook later, the company saw quite a good response in those early days and an excellent number of returning customers.

“We planned to continue testing the market until December 2020 to see how people respond,” tells one of the founders of Green Grocery to FS. “We divided the six months into two three-month segments. We were willing to shut down the operation if we found that there was not enough demand or faced an issue. After the first three months, we were surprised to see that 70-90% of customers who bought our products once returned for a second order.”

That’s how the Green Grocery team figured out that they are onto something. In February 2020, Green Grocery rented an office and launched a full-fledged operation. Business has grown since. The full-time team has grown to 10 people along with 5-6 part-timers.

Green Grocery collects the best ingredients and processes them in the best possible way to ensure 100% quality. For example, the company does not buy products such as mustard oil from suppliers. Instead, it collects mustard seeds from farmers, blends to find the right mixture, and processes oil in-house. Of course, this procedure increases the production cost.

Spices are produced using unique in-house recipes and processes. For example, chilly powder. It collects red chilies from Bogra, cleans them, dries them, cleans them again, and at last blends them. It does not keep the pedicels when blending. The spice customers get is of its purest form.

Quality obsession remains a consistent thread across its products. For example, Green Grocery produces ghee and claims its ghees are the purest because it ensures 100% milk in making ghees. To ensure the purest ghee and still offer a relatively competitive price, it collects milk from Pabana where milk is relatively cheaper, between taka 25-35 per liter, which allows the company to keep the price of its ghee within tk. 1200. Had it been produced in Dhaka, it would not have been able to offer pure ghee at the current rate because milk is expensive in Dhaka and it takes about 36 liters of milk to produce only 1.5 kg pure ghee.

The company says it understands that it charges customers a higher price and wants to make sure the quality. The company plans to continue this process to ensure quality in the foreseeable future even if it contracts its growth opportunity.

Green Grocery manages logistics in-house to control logistics costs since grocery delivery is expensive to do using a third-party logistics service. Delivery fee is often free for shopping above a certain volume. The company says it subsidies the delivery charge in many instances for customers.

The company has a website where customers can go and place orders and is working on a mobile app to be launched in the next few months.

It has a small telesales team who sell products over the phone. The company also sells via Facebook, a common channel for ecommerce businesses in Dhaka.

For inventory management and distribution: Green Grocery has a warehouse in Badda from where it manages all its deliveries. While the company covers the whole of Dhaka, it mainly focuses on Gulshan, Banani, Baridhara, Mirpur DOHS, Mohammadpur, Dhanmondi, and Niketon area.

The company says if it sees that certain locations have sizable volume it will go for opening micro-warehouses in those locations.

Quality and trust through customer engagement: Green Grocery says it is not bringing anything new, the idea of safe food has been there for a long time. But the company stresses the point that it ensures quality and when it claims a product is of a certain quality, it often is.

Customer service and return policy: Green Grocery has a flexible return and refund policy. Customers can return products within 7 days if they are not satisfied with a product. More than 7 days return option is also being considered for select cases.

One of the areas Green Grocery aims to differentiate itself from other players is superior customer service. The company says it has been investing in customer service and aims to offer a distinct experience to customers.

Product innovation: Green Grocery has launched “packages”, a new product where it creates packages of different products for different meal times and specialty. The company has also innovated several recipes and varieties.

“Essence of Sylhet”, a package of popular Sylheti products, has gained quite a popularity. The package is made for people who love Sylheti food. The combo consists of homemade Shatkora pickles, Binni rice, tea leaves, and other items. The company aims to do the same for other regions as well in the coming days.

Packages and customization are something Green Grocery plans to play around with. The company aims to take it a notch up allowing customers to make their own packages.

Businesswise, selling packages is easy for Green Grocery because delivering single products is tough whereas selling a package means you are selling a bundle that is much more convenient logistically.

From DTC to distributed commerce: Green Grocery sees itself as a food company. It has a DTC element to it since it sells directly to customers using its website and Facebook page. But it also wants to explore other platforms.

In the next couple of months, Green Grocery plans to make its products available across major ecommerce platforms in Bangladesh such as Evaly, Chaldal, Daraz, etc.

B2B strategy: The company is working on a corporate strategy where it plans to engage with B2B customers. The company says it is in talks with several companies to open an outlet in their offices from where their employees will be to buy food subsidized by the organization.

Physical retail: Green Grocery plans to open at least one physical outlet by the end of 2021. In the next seven years, the company plans to establish retail shops in 100 areas of Dhaka.

Online to offline and the convergence of both worlds is an increasingly popular trend across markets these days. Many safe food brands including Khaas Food and Neofarmers have ventured into physical retail in the past few years. Green Grocery eyeing physical retail expansion comes as a natural move for the company.

With the growing concern among people regarding food safety amid constant reports of adulteration and compromised hygiene practices of industrialized food systems, we are seeing a growing demand for safe food in the market. This has given rise to a new breed of food companies selling all kinds of safe food.

Khaas Food, one of the earliest players in the market and a presumed market leader, and more premium brands like Neofarmers have been able to build a meaningful presence in the market. Several other smaller players such as Madol, Farmers Best, Prabartana, etc operate in the vertical. In aggregate, some 5-6 prominent players operating in the segment. Big players such as Shwapno are now eyeing the segment with seriousness.

Industry insiders suggest the market is big and growing and have rooms for more players.

The existing players in the vertical are of two inclinations. While Khaas Food has been working hard to make safe food an affordable option for a greater number of people, Neofarmers remains a niche and premium player.

Safe food remains a relatively expensive option for the common population. The companies say these foods are expensive to produce. Moreover, the limited scale of the majority of the players in the vertical makes it even a greater challenge to bring down the price.

Green Grocery sees there is a space between these two extremes where it can offer a reasonable price and ensure quality and serve a customer base who are underserved by the existing players in the market. It also assumes that the strategy would allow it to attract customers from both ends of the spectrum.

Supply chain strategy: To have greater control over supply and product quality, Green Grocery sees contract farming as a key part of its strategy going forward.

Deliberately small: Quality remains the key priority and obsession for Green Grocery. The company says it does not aim to become the largest player in the sector. Rather it plans to stay deliberately small to have greater control over quality. “If we can serve 5000 families in Dhaka, that is enough for us to build a sustainable operation”, one of the founders of Green Grocery tells FS.