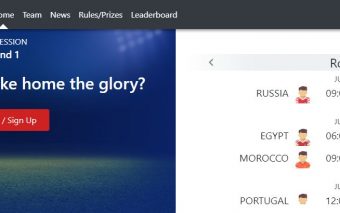 On the eve of Football World Cup 2018, country’s leading financial brand, IDLC Finance Limited, has launched an unusual marketing initiative called IDLC KickStart – a fantasy football game. This is the first such initiative in Bangladesh by a local brand where fans will be able to formulate their own World Cup fantasy football team on the IDLC Kickstart website and Android app and win lucrative prizes every gameweek while also learning fun, interesting and insightful tips on investment and personal finance. Fantasy sports are changing how many fans watch and enjoy major sports around the world, mostly with a small group of friends. During every football world cup, FIFA also launches a world cup fantasy football played by millions of fans worldwide. Fans have long enjoyed fantasy sports leagues in which they assemble teams that compete for various prizes.

The difference between IDLC Kickstart Fantasy football game and other similar games is in the objective and how the game is designed. IDLC Kickstart sets quite a high ambition for itself. While it is a fantasy football game, it also aims to promote investment and financial literacy in a fun and engaging way. Playing the game, you not only win various fantastic prizes, you also learn how to better manage your personal finances and become a wiser investor. More on that in a moment.

In this game contestants can assemble a new fantasy team each round of the game, starting from group stage to final: they invest a fixed amount of (virtual) money, in IDLC Kickstart contestants are given BDT 100 million to begin with (you can borrow money from IDLC Kickstart as well as you go), spending from that budget on players, each player coming with their own price tag, based on the data from FIFA Fantasy world cup. A star like Lionel Messi of Argentina would cost a lot more than, say, a lesser-known forward from the Saudi Arabia team, so choosing Messi would leave a fan with less money to spend on other players for his fantasy team.

The idea is to assemble a team that amasses the most goals, assists, wins, clean sheets and other key statistics that allows a contestant to earn more points and subsequently win various prizes. Before every round, transfer periods will be given where players will get to buy or sell international players to form their own teams, depending on which teams are playing in that particular round of the World Cup. IDLC Kickstart has announced a host of prizes for the winners. There will be winners in every stage and there will grand winners.

In the group stage, three winners will get a hosts of prizes each gameweek starting from Bluetooth Speakers, Mi Action Camera, Xiaomi Smartwatch and in the Knockout to final stage two contestants in each stage will get prizes including DSLR Camera, Xbox One + FIFA’18 Game, Sony PlayStation 4 + FIFA’18 Game, and 1 Xbox or 1 PlayStation in every round respectively and finally, the contestant with the highest cumulative points will win the grand prize which is a free trip to Bali, Indonesia for 4 people.

If you a football buff, there can’t be a better way to enjoy this year’s football world cup than playing IDLC Kickstart with your friends to increase the fun of the world cup.

A short guide to how IDLC Kickstart works A fresh approach to promoting personal investment and financial literacy

This sounds like a fun and engaging way to watch football world cup, it is also an innovative and interesting approach to promoting investment and financial literacy, at least that how IDLC Finance’s marketing team sees it. Regardless of the outcome of the game, you must accept the fact that this is a fresh and creative approach to take on a complex challenge like educating people on personal finance or stock market investment. This is exactly what IDLC Finance aims to achieve through this game. And this is where IDLC Kickstart is different from other fantasy football games.

IDLC Marketing team says there is a lot of similarities between managing your own investment portfolio and managing your own world cup football team. “Our goal is to inspire the people of this country, especially the youth, and promote financial and investment literacy, says,” Jane Alam Romel, Group Chief Marketing Officer of IDLC Finance limited. “We want people to be more aware of personal finance and learn tips and tricks of investment because investment is what helps you to build a better future. In this case, I believe that IDLC Kickstart, a strategic fantasy football game, is a simple and fun platform to achieve these goals.”

It starts with the very basic in which you have an amount of BDT 100 million to invest and win prizes, pretty much like investing in real life. In real life when you invest in stocks, you buy various stocks and you make money when your stocks perform well. The idea, although not exactly same, is similar. You buy players and when your players perform well, you win points. In both cases, you invest your money which means you have to be very judicious about how you invest it, you have to make informed decisions about what players you buy, what player to sell, how long to keep a player and so on.

It is an active process where you need to study in order to know which players and teams are likely to do well and buy them accordingly. You have to understand the market. You have to gather data. You have to plan and execute well. You have to constantly follow the market and stock trends. The similarities don’t end there and it is not about similarities alone. The game also offers useful investment and financial tips in every step. For instance, when you enter to buy players it shows a message at the top that says “Before building your team you must know everything about your players. The same is true for your portfolio, in which case you must learn the ins and outs of the business you want to invest in!” and when you decide to buy a costly player it shows a message that says “some players are risky to play with just like some investments. Consider high-risk investment after you have built your low and medium risk investment!” and it does not end there, more useful, insightful investment and finance tips follow throughout the game.

Fantasy football is not something every one of us plays. There are hardcore fans who play these games all the time and IDLC Kickstart, as a local initiative, is a no-brainer for them. But for many of us who are not much into fantasy football but enjoy football as a game and are also into investing and interested to learn more about personal finance this is an absolute fun and equally useful way to enjoy this years Football World Cup and at the same time, you always enjoy the chance of winning amazing prizes.

The IDLC Kickstart website and app both are simple, user-friendly and fun to use and they are also publishing regular content on World Cup on their official Facebook Page which will help you stay updated about the game.

(This was developed by Storylab, FS in-house branded content studio, in collaboration with IDLC marketing team. You may learn more about Storylab here.)