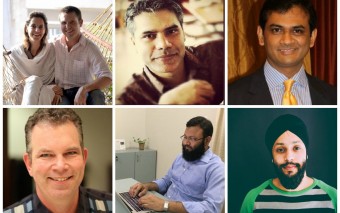 The Most Popular Future Startup Interviews Of 2015 [Year In Review]

“We sensed that people in Bangladesh have so much potential. As Fiona says, so many people are natural entrepreneurs; they often work through their lives to put food on their table“, says Jerry, “People have drive, commitment, and ideas but particularly for small and growing business and particularly in rural areas, they have very limited support” adds Jerry once asked about why they chose to work in Bangladesh. Interview of Jerry and Fiona, husband-wife duo of Open Accelerator program, was our first interview of 2015 and it resonated with so many people out there.

One more month and 2015 is gone! Almost everyone around us is getting ready for welcoming a new year which I find a little sad and unsettling. As we are planning to welcome new year, here is the most popular Future Startup Interviews of the year, most popular means those you shared and adored most and those we enjoyed taking and reading most [revisit 2014 list]. Jerry Nicholson and Fiona Nicholson are the husband wife duo behind the wonderful impact investment firm Tindercapital and awesome accelerator program called OPEN Accelerator for rural entrepreneurs of Bangladesh. Jerry & Fiona came to Bangladesh four years ago to pursue their dream which is in simple: supporting people with dream of making ideas happen come true, especially in under-served communities of Bangladesh. We are immensely dazzled and incurably inspired by their initiatives.

We sat with Jerry and Fiona at a local coffee shop in January 2015 to discuss, understand and dig deep into their journey, story and knowledge. It went so well that we decided to run the interview in two parts. Here is part one. We can assure this will literally kick your ass and make you to run towards you dream now.

There are lots of people in Bangladesh who are living in perpetual uncertainty with low income and job. We often reflect on that when we feel low and concerned about whether Tindercapital is going to run out of funds. This inspires us during our moments of doubt. Tindercapital may work or not but it is a risk worth taking and when you look at the people we are seeking to benefit, it does not look like that big a risk any way. ~Jerry

2. Interview With The Man Behind Bangladesh’s First Comics Shop Who doesn’t want to fly, rescue people, and fight all that are evil? We all, at some point in our childhood, have wanted to become superheroes, be it the Batman of Gotham City or the Spiderman who keeps the streets of New York peaceful. The comic books featuring the superheroes have always provided us with the opportunity to jump out of our dull lives and fantasize about being someone else with enormous power and the ability to make a difference.

Although popularity of comic books is in wane due to the rise of internet, video games and apps, but the superheroes continue to capture our imagination even today and their power illustrated in graphic novels entice us.

AKM Alamgir Khan, popularly known as Jamil, is the founder of Jamil’s Comics & Collectables (JCC) – Bangladesh’s first comics shop. Jamil aims to rekindle the spirit of superheroes by gathering all sorts of comic books for the ardent comic lovers.

From his childhood Jamil is a passionate lover of comic books. He spent hours reading superheroes and he said he owes a lot to these books.

JCC has an outlet in Dhaka which is located in Banani and has more than 5,000 comics in stock. Every month Jamil imports almost all the Top 10 comics of that month. JCC now offers hundreds of titles, Trade Paperbacks (Collection of Comics), Hardcover items, selected Action Figures and Posters.

I never realized this until 2008 when my daughter was born. I suddenly felt a passion for comic books. I wanted my daughter to taste what I tasted during my childhood. But there was almost no option for doing so.

3. Face To Face With Sean Griffin Of StartUp Cup Sean Griffin is a Silicon Valley based serial entrepreneur. He is the CEO and Founder of StartUp Cup-a global business model competition that focuses on launching successful startups and building startup ecosystem. Always thinking out of the box, Griffin dropped out of high school and started his own company at the age of 12.

Griffin visited Bangladesh in April 2015 on the occasion of Bangladesh Startup Cup celebration night. On a rare occasion during his visit we sat with Griffin to know more about his journey as an entrepreneur, launching a global startup movement, what it takes to build a sustainable startup ecosystem, what makes a great founder and more.

Real entrepreneurs are generally a rare breed. Less than 35% of aspiring entrepreneurs are the real ones. They are usually loners so we have got to design strong programs to use as magnet to pull them out of their corners. Sajid Rahman is an entrepreneur and investor. He is the director of Founder Institute Bangladesh. Mr. Rahman has an astounding body of work in finance. He has worked in a number of countries around the world and managed a few billion-dollar banking businesses in Asia and Africa. He is currently setting up the first wind turbine power plant in Bangladesh. He sits in the board of many financial services, technology and energy companies in US, Europe and Asia.

We spoke to Mr. Rahman on May 26, 2015, as part of our ongoing ‘Conversation With Investor’ series to better understand his take on investment, startup ecosystem in Bangladesh, what makes a startup funding worthy and a founder tick, and what makes a good pitch and more.

5. Face To Face With Naveed Mahbub Naveed Mahbub is a comedian and the founder of Naveed’s Comedy Club (NCC) – Bangladesh’s first standup comedy venue. It’s based in Dhaka. He started his schooling in Karachi, Pakistan, then in Dhaka after Independence, and then in UK.

Naveed had an extraordinary childhood. After completing his Bachelors in Electrical Engineering from BUET, he went to the US to do his Masters in Electrical Engineering from the University of Michigan, Ann Arbor. After graduation, he worked at a company called Takata for 7 years in research and development in automotive safety electronics. Then he worked at Wingcast in the US, Ford motor company, and then at Kyocera Wireless and Qualcomm.

After returning to Bangladesh, he became the CEO of Nokia Siemens Network (NSN) Bangladesh and after that the CEO of IBM Bangladesh. However, while maintaining all these corporate jobs, Naveed has been pursuing his passion, comedy, on the side.

I went for Hajj in 2005, and over there I saw after every prayer there is a janazah for 17, 18 or 20 people. That’s when I realized one day this is my destiny too. So what am I going to do until then? Am I just going to earn a lot of money, do job, and just be a nobody? Or do I leave something good for this planet?

6. The Journey of An Idea: Face To Face With Mohammad Abdul Matin Emon, Founder and CEO of Doctorola [Part One] Mohammad Abdul Matin Emon is the Founder and CEO of Doctorola, a startup that aims to remove some critical roadblocks in receiving and delivering better healthcare services in Bangladesh. He has an astounding body of work. Previously, he had started successful businesses, worked as senior level managers with C-level suites in a few leading local and international organizations, and also had tasted his share of failure in business.

We had a chance to speak with Mohammad Abdul Matin Emon about Doctorola, Its journey, Doctorola’s recent funding round, and struggles of a startup founder and more. This is part one of our conversation.

I started my first business in 1994, a computer hardware selling company. It was quite a success. Then I moved into software development. I built an ERP called “Summation” back in 1997-98. The concept of ERP was very new in the market at that time. Those were very early days of any integrated business application. Being too early in the market had been one of my major mistakes that I could understand later.

7. An Interview With Amar S. Magon of Payza BD Amar S. Magon is a charismatic Canadian entrepreneur, doer, and marketer. Previously, he worked at global consulting firm Accenture and has been integral in the startup and growth of multiple technology companies. Currently, Amar is the Chief Marketing Officer of Payza BD (Casada Technology Ltd), an e-wallet provider and online payment platform. Since its beta launch, Payza has seen steady growth and has released multiple products that allow people to load money, connect their bank account to their e-wallet, and make online transactions with ease.

We recently had the opportunity to speak with Amar so that we could better understand Payza, its potential, impact, and more. Online payments and the barriers that currently exist is one of the major problems facing Bangladesh’s ecommerce industry. We need a better payments infrastructure combined with better payment services in order to solve this problem and ultimately help the local e-commerce industry to thrive and grow. Payza sees itself as a real difference maker here, with a solid line of products and services that can create a lasting impact.

One of the key lessons for me is that while introducing a new product or service in a demand-driven market, there still needs to be a considerable amount of energy spent on product awareness and education campaigns. You still need to put in the sweat and hard work in order to make things happen.

We have a cool bi-weekly newsletter, signup here and get everything about what and who in Bangladesh’s startup and entrepreneurship scene delivered directly to your inbox.

Ruhul Kader is a technology business and technology policy analyst based in Dhaka, Bangladesh. He is also the co-founder and CEO of Future Startup and author of Rethinking Failure: A short guide to living an entrepreneurial life. He writes about internet business, strategy, technology, technology policy, and society. He can be reached at [email protected]