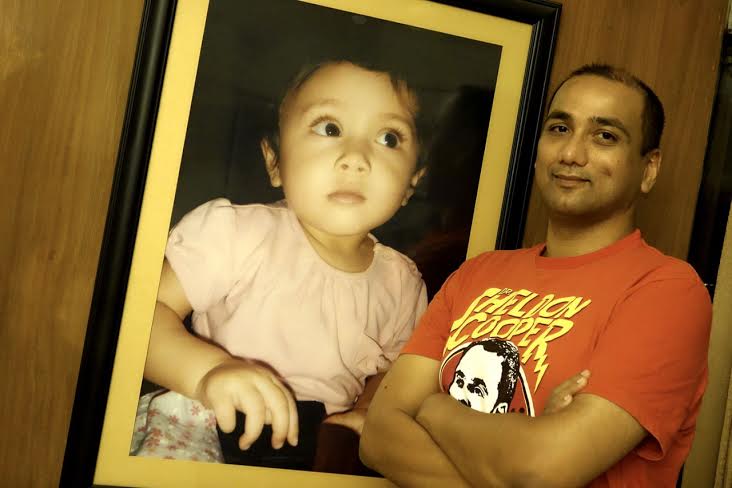 Interview With The Man Behind Bangladesh's First Comics Shop

Who doesn't want to fly, rescue people, and fight all that are evil? We all, at some point in our childhood, have wanted to become superheroes, be it the Batman of Gotham City or the Spiderman who keeps the streets of New York peaceful. The comic books featuring the superheroes have always provided us with the opportunity to jump out of our dull lives and fantasize about being someone else with enormous power and the ability to make a difference.

Although popularity of comic books is in wane due to the rise of internet, video games and apps, but the superheroes continue to capture our imagination even today and their power illustrated in graphic novels entice us.

AKM Alamgir Khan, popularly known as Jamil, is the founder of Jamil’s Comics & Collectables (JCC) - Bangladesh’s first comics shop. Jamil aims to rekindle the spirit of superheroes by gathering all sorts of comic books for the ardent comic lovers.

From his childhood Jamil is a passionate lover of comic books. He spent hours reading superheroes and he said he owes a lot to these books.

JCC has an outlet in Dhaka which is located in Banani and has more than 5,000 comics in stock. Every month Jamil imports almost all the Top 10 comics of that month. JCC now offers hundreds of titles, Trade Paperbacks (Collection of Comics), Hardcover items, selected Action Figures and Posters.

Please briefly tell us about yourself.

Hi. I am Jamil, full name AKM Alamgir Khan. Born and raised in Dhaka. I went to Udayan Biddalaya for schooling, but switched in class nine to sit for SSC (1991 batch) from Government Laboratory School. I sat for the HSC in 1993 from Notre Dame College. Then I went to IBA, Dhaka University. I did my MBA from the same institute.

[blockquote source]I was an introvert in nature and I had to build my own world. Thus comic books were a good refugee. It was quite fun to indulge into the world of comics. I had a few friends who shared my hobby. It only made the experience better.[/blockquote]

Let’s get back to when and how your passion for comics started.

Comic has been a big part of my growing up. I was an introvert in nature and I had to build my own world. Thus comic books were a good refugee. It was quite fun to indulge into the world of comics. I had a few friends who shared my hobby. It only made the experience better. It was quite difficult to get the comics we wanted back on those days. But it did not stop me rather it made the whole process more fun.

Do you remember gobbling up a comic book for the very first time? Which one was that?

The very first comic I bought was a World’s Finest (Starring Superman and Batman), from a local flea market. I grew up in Kakrail and Bijoy Nagar area and there was this row of 3 small shops where they would sell old books and magazines. This was my favorite place. My dad would give me 10 taka for Tiffin each day, and I would always spend it in those shops to buy comics.

[blockquote source]My dad would give me 10 taka for Tiffin each day, and I would always spend it in those shops to buy comics.[/blockquote]

That’s interesting. So what was it that inspired you to own a comic book store?

Comic was a big part of our culture back in the 80s. But due to the global slump of comics in the late 90s, along with other parts of the world our culture of reading and spreading comics started to diminish as well.

I never realized this until 2008 when my daughter was born. I suddenly felt a passion for comic books. I wanted my daughter to taste what I tasted during my childhood. But there was almost no option for doing so. Regular bookstores seldom served this need for comic books. So I thought I could do this. It was a decision of quite big risk since we don’t have a culture of reading books but I wanted to bring back comics.

Back then I used to invest in stock market and it was going well and I made some money. It gave me a little freedom to explore my passion. I was aware that it might end up as a disaster and I would have to close the shop in a few months. But still I wanted to do it. Luckily, it turned out well.

[blockquote source]I never realized this until 2008 when my daughter was born. I suddenly felt a passion for comic books. I wanted my daughter to taste what I tasted during my childhood. But there was almost no option for doing so.[/blockquote]

When you were starting out, how did you think about making profit? Is this a passion project or you saw an opportunity and wanted to make it work?

Profit was not a motive. Some of my close friends think I am running a charity still. I knew there was an opportunity but I also knew not much people buy comics these days.

My friends and family knew from the start that I was different. So it was not a problem. Many did and still do frown upon this initiative. At the same time, many have also congratulated me for doing this fun thing.

How do you operate and manage your bookstore?

I have two people who run the store for me. I decide on the policies, campaigns, promotions and stock. I spend way too much time online interacting with fellow comic enthusiasts. It takes a whole lot of time and a whole lot of effort. But it is fun.

Name few popular comic books that are running well for last couple of months. Do you think customer range is very narrow in Bangladesh, as especially with the emergence of video game and all sorts of digital things, fewer people are actually into buying comics?

We have strong demand for the Batman series right now. There is a good demand for Amazing Spider-man, Justice League and Flash as well. Comic books is a pop culture element, like most things in pop culture, a lot of people concentrate on the popular stuff while some high quality products go under the rudder.

Internet and video games has a negative effect on number of people buying comic books today. At the same time, availability of comics online does mean that more people are into comics than the actual number of buyers. But at times, I feel that helps. Many people get impressed with the comics they read online and want to buy it for the collection.

[blockquote source]Comic books is a pop culture element, like most things in pop culture, a lot of people concentrate on the popular stuff while some high quality products go under the rudder.[/blockquote]

Name few comic books that never failed to entertain you?

If you mean like a series, then there is none. I don’t think there has ever been a series running for a long period with same higher standard, just like TV shows. But yes, there are some comics I keep going back to. Some issues of Neil Gaiman’s Sandman, Alan Moore’s Swamp Thing, Frank Miller’s Daredevil and all will do that.

Did you ever dream of owning such a highly praised comic book store before starting JCC?

I am probably the most dedicated comics collector in Bangladesh. So yes, I guess I did think somewhere along the line I would have a comic book store.

What were the few major obstacles that you faced to date?

Keeping up the growth has been quite a challenge. We need more people to come in and buy books but it is such a difficult job to increase sales.

Has there been a point when you have taken a big risk to move forward?

The biggest risk in terms of JCC was probably opening the shop. But now I think it was a risk worth taking. I meet random people who come up and shake hands, take photos and overall genuinely appreciate the efforts.

How do you see the impact of growing e-commerce trend in your business?

I struggle to tap into the e-commerce bandwagon. We have our online store, but we failed to attract that many customers. I assume most of our customers love visiting the store than ordering online.

[blockquote source]The biggest risk in terms of JCC was probably opening the shop. But now I think it was a risk worth taking.[/blockquote]

What are your future plans for JCC? Do you plan to expand it and open more branches?

I want to concentrate on online sales next. Opening new branches is not in the priority list.

What advice would you give to someone who is just starting out and ask for your advice?

Bangladesh is a land of opportunity. But be careful. Don’t be naïve and don’t trust without reason. E-commerce is opening many doors but it has problems as well. Make sure you understand what you are doing or want to do before starting it.

[blockquote source]If you have a product that people want, you have a business. But do not assume success before you see sustainable operations.[/blockquote]