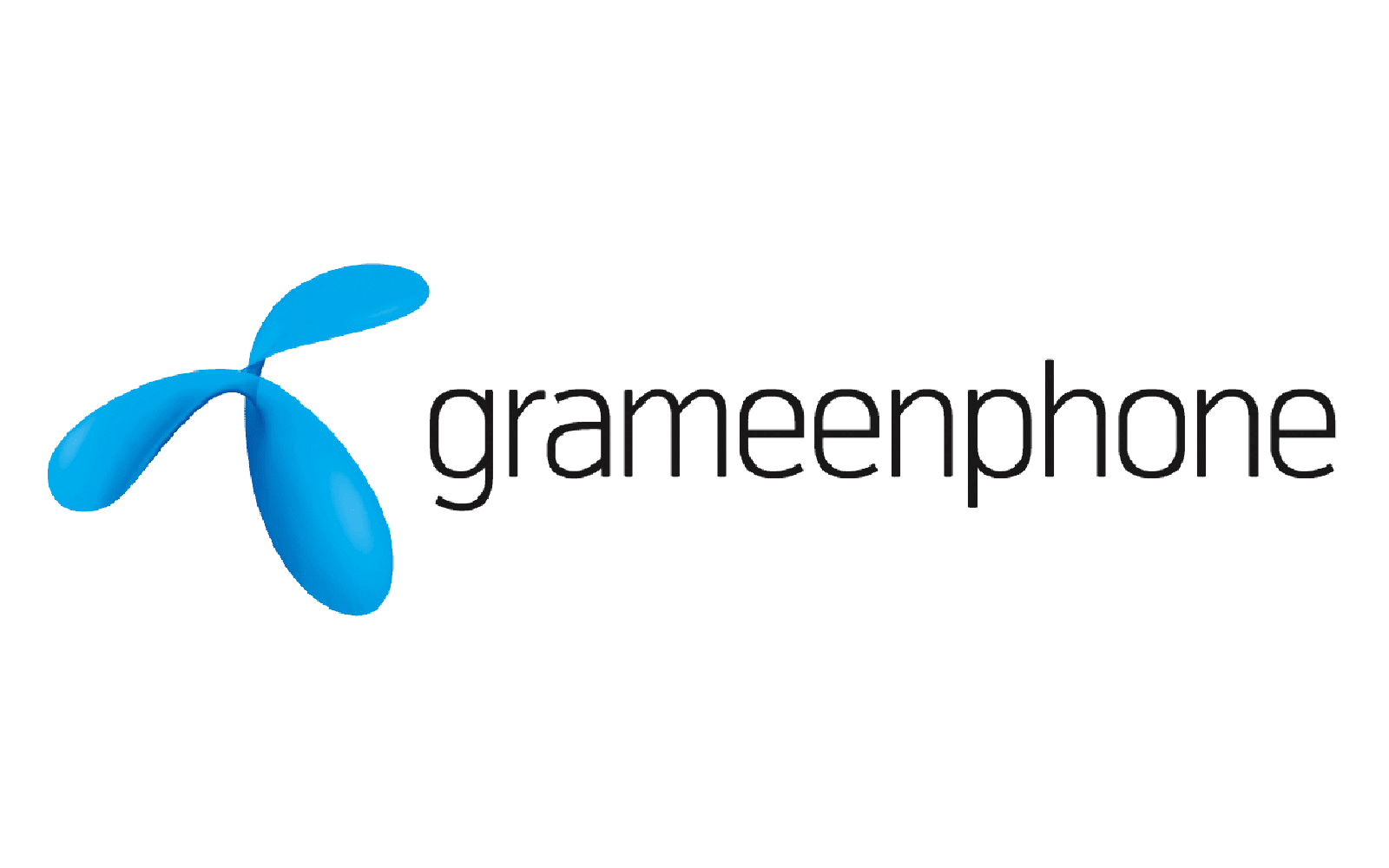 Grameenphone, a joint venture of Telenor and Grameen Telecom Corporation, is the largest telecommunication service provider of Bangladesh serving more than 79 million subscribers (as of December 2020).

Iqbal Quadir, the founder of Grameenphone, saw mobiles as a productivity tool to lift up the poorest in the world and envisioned a future where mobile phones could be a source of income. After leaving his job as an investment banker in New York, Quadir raised funding from New York-based investor Joshua Mailman and returned to Bangladesh. He worked for three years prior to the launching of Grameenphone with the support of Grameen Bank and Telenor, a Norwegian telecom company. On November 28th, 1996, Grammenphone was issued a license by the Ministry of Posts and Telecommunications of the Bangladesh government. The company officially started its operation in March 1997. In 2006, Grameenphone changed its logo to match its parent company Telenor’s logo.

Since 1997, Grammenphone has invested BDT 347.4 billion (US$4.12 billion) to build network infrastructure in Bangladesh. It has built the largest cellular network in Bangladesh with 15,900 base stations, geographically covering 99% of Bangladesh’s population.

Throughout the years Grameenphone has launched several innovative mobile-based solutions. In February 2006, Grameenphone established 26 Grameenphone Community Information Centers (GPCICs) across the country as a pilot project to provide rural people with access to the internet and communication service. Grameenphone partnered up with Grameen Telecom Corporation and Society for Economic and Basic Advancement (SEBA). Grameenphone provided the infrastructural support, while its partners were in charge of selecting and training the entrepreneurs for the GPCICs. The entrepreneurs were trained to teach people how to open an email account and use the internet. These Community Information Centers were used for various business and personal purposes, including accessing information relevant to health and agriculture, video conferencing, accessing government information, etc.

On November 4th, 2006, Grameenphone, partnering up with Telemedicine Reference Center Limited (TRCL), launched its Healthline for all the GP subscribers. In October 2007, the GP healthline was relaunched after increasing its capacity. Through this Medical Call Center, GP subscribers are able to get medical consultation from a licensed physician by dialing 789 from any GP number. The healthline is open 24/7.

Gpay, which was launched in October 2016, is another initiative of Grameenphone. Gpay is a mobile wallet that GP users can use for paying utility bills, airtime recharge, voice or data pack, and purchasing train tickets. It also enables the user mobile-to-mobile fund transfer.

In October 2015, Grameenphone launched the “GP Accelerator Program” to mentor aspiring startups centered on the digital and mobile communication sector and provide seed money to accelerate their businesses. Since the launch of GP Accelerator in 2015, GP Accelerator has been Grameenphone’s key initiative to help early-stage tech startups through a cohort-based, mentor-led, and curriculum-driven open innovation platform In November 2019, a new version of the Accelerator program “GP Accelerator 2.0” was launched.

In 2017, Grameenphone launched the MyGP app which enables the users to personalize their own cell phone packages and discounts based on their personal choice and need. Other apps of Grameenphone such as Shoparu, Bioscope, etc, and third-party ride-hailing apps Uber and Shohoz are encompassed within the MyGP app.

The Grameenphone Center (GPC) serves as a "one-stop solution" for GP customers, with all telecommunications products and services, under a single roof.

Grameenphone has introduced several initiatives to provide students with quality education service. Grameenphone launched GP School to provide high-quality education in remote areas of the country through video conferencing, providing internet facilities in 250 schools in remote areas of Bangladesh (as of June 2017). It launched Studyline to provide students with answers for queries related to college and university admission. Mystudy, another educational initiative of Grameenphone, is a mobile learning platform to help students to take preparation for the board examinations. Grameenphone partnered with the British Council and Durbin Labs to develop the “MyStudy” app. The application enables students to go through the contents, self-assess performance, and receive suggestions. There is also a module for parents in the app to monitor student’s performance.

Grameenphone has also played an active role in climate initiatives. In 2008 Grameenphone initiated the “Grameenphone Climate Change Program” with a vision for reducing carbon emission, being environment-friendly, and creating momentum with the community and people.

In 2009 Grameenphone was listed in Both DSE ( Dhaka Stock Exchange) and CSE (Chittagong Stock Exchange) and its IPO (Tk 486.08 Cr) was the largest ever IPO of Bangladesh. At present, Telenor holds a 55.8 % ownership interest in Grameenphone. The rest of the share is held by Grameen Telecom (34.2%) and general retail and institutional investors (10%).

In January 2020, Yasir Azman became the CEO of Grameenphone.

Grameenphone has played the role of a pioneer in empowering citizens of a developing country like Bangladesh by creating opportunities for them through investing in communication technology. Just as economist Jeffery David Sachs said: “Grameenphone opened the world’s eyes to expanding the use of modern telecommunications technologies in the world’s poorest places”

How Grameenphone Was Created | Future Startup

Iqbal Quadir, founder of Grameenphone and the founder and director emeritus of the Legatum Center for Development and Entrepreneurship at MIT, shared how Grameenphone was created and what it takes to make something of consequence.

Yasir Azman, the new Chief Executive Officer of Grameenphone Ltd, has shared his views with The Business Standard on the company's priority areas, preparation for future, ongoing dispute with the telecom regulator.

A bickering of many consequences | TBS

GP on a roll | An Interview With Petter-B Furberg, the CEO of Telenor and former CEO of Grameenphone | The Daily Star

“We have passed two decades successfully in Bangladesh. It has not been only a business success for us but the journey has helped the overall development of the country,” said Petter-B Furberg, the former CEO of Grameenphone.

“Sigve [Brekke, Telenor Group’s CEO] gave me a piece of advice when he asked me to take on the role,” Yasir Azman reflects. “He wanted me to be careful. He said if you change yourself as CEO of a big company as you transition roles, that’s the biggest mistake. Everything was possible, he said, the organization would support me, but if you change who you are, then you lose.”

There are not many companies like Grameenphone in Bangladesh. The company is a master of execution and very good at thinking ahead of the competition.

In this interview with Future Startup, Yasir Azman, CEO of Grameenphone, gives us an insight into Grameenphone’s digital initiatives and its digital ambition.

In this interview, Iqbal Quadir, the founder of Grameenphone and founder and director emeritus of Legatum Center For Development and Entrepreneurship at MIT, sat down with Karl Ulrich, vice dean of Entrepreneurship and Innovation at Wharton, to talk about his journey from growing up in Bangladesh to building a global business.

As a child in Bangladesh, Iqbal Quadir once walked half a day to the neighboring village, only to find that the pharmacist whose help he needed was already gone. Twenty years later as an investment banker on Wall Street, he found himself similarly frustrated when a computer network outage sidelined his entire office. Communication could have prevented either day from being wasted, he realized, and so he coined the phrase, “Connectivity is productivity.”

“Bangladesh's largest mobile telecommunications operator by revenue and subscriber base, Grameenphone Ltd. is raising 4.86 billion Takas ($70.65 million) in what will be the country's largest primary market share sale later in the month.”

Power to the people (Paywall)

“AS A young boy in rural Bangladesh in 1971, Iqbal Quadir walked ten miles to collect some medicine for a sibling who was unwell. But when he arrived at his destination, the medicine man was not there, so he had to walk home empty-handed, having wasted an entire day.”

Iqbal Quadir: The power of the mobile phone to end poverty | TED