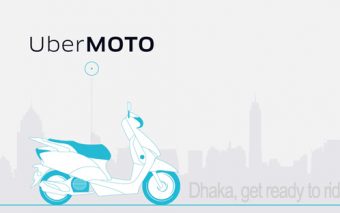 Uber has announced that it is going to launch Uber Moto, its bike-sharing service, in Dhaka. According to several reports, the company plans to launch the service within this week and has already registered several thousand bikers on its platform.

Coming from Uber, this is an expected move for several reasons. One is, of course, local upstart Pathao which launched bike-sharing in 2016 and has gained significant traction over the past one year. Pathao has also launched Pathao Cars recently. Until now, Uber could not compete with Pathao purely because of the mode and it was expected that, like many other similar markets, Uber would launch Uber Moto in Dhaka as well.

The other reason is, of course, the traffic congestion in Dhaka. The situation is showing little sign of improvement. According to a World Bank report, the average traffic speed in the city has come down to 7km per hour which is almost close to walking speed. Given the situation, bike-sharing makes much more sense than cars.

In fact, to our observation Uber and similar car-hailing services have contributed to the growth of traffic congestion in the city encouraging people to buy cars and give them to Uber for earning money. Moreover, unlike many cities where drivers own the cars, owners seldom drive in Dhaka and turning it into a side hustle.

Uber Moto and Bike-sharing in Dhaka

Uber first launched a motorbike service in Bangkok, Thailand in 2016. Since the company has launched the service in many other markets in Asia including India. In July this year, the company announced that its Uber Moto service completed 2 million trips in India.

Motorbikes are already a popular form of transportation in Dhaka, thanks to the notorious traffic congestion. Over the Pathao has done the groundwork and bike-sharing is a reality in the city. Uber will be able to take advantage of the awareness that Pathao and other services like MUV have helped to create. At the same time, this will also intensify competition in the space. Given the Uber’s deep pocket, it will be interesting to see how things unfold.