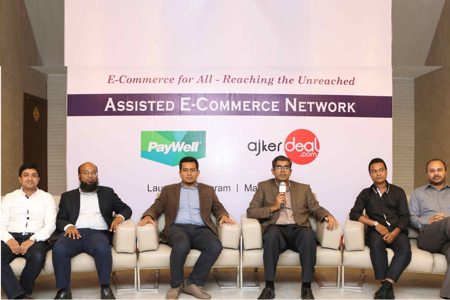 Ajkerdeal and Paywell come together to launch Assisted eCommerce Network

There is a disconnect in ecommerce in Bangladesh and a new partnership between PayWell, a service aggregation platform, and Ajkerdeal, one of the leading ecommerce marketplaces in the country, plans to end that through enabling country-wide agent network of PayWell to sell products from Ajkerdeal through their app. The new partnership is named as Assisted eCommerce Network, which according to Anisul Islam of PayWell, is not entirely a new idea and is common, to some extent, in many parts of the world.

The new partnership aims to tackle two major problems and is particularly for people outside Dhaka. The number one problem is: there are a lot of people who don’t have access to internet and while many do have access, internet is too expensive for most people, says Fahim Mashroor of Ajkerdeal where broadband is not yet there, that does not allow them to buy things online while they want to or need to. Assisted ecommerce network plans to fix that.

The number two problem is: there is a lack of trust in customers when it comes to shopping online due to past bad experiences. In Assisted model, there is an agent in the middle which will increase the confidence of the customers because he or she can make the agent accountable if they don’t like a product or can return a product easily if they want to. At the same, it will solve the whole payment problem and also fake orders problem for the ecommerce.

While the partnership sounds very exciting, it also sounds quite an old school idea. The apparent thing that makes the partnership exciting is that it will allow many new people to access ecommerce and will, to some extent, help solve trust problem that ecommerce has. At the same time, it also looks feasible given that PayWell already has an agent network and they would feel motivated to push it if they find another stream to generate revenue. Having said that, it will still take significant effort to make people convince and use ecommerce service from a physical shop and then we also have to understand the way people shop online, the habit definitely is not similar to in-store shopping.