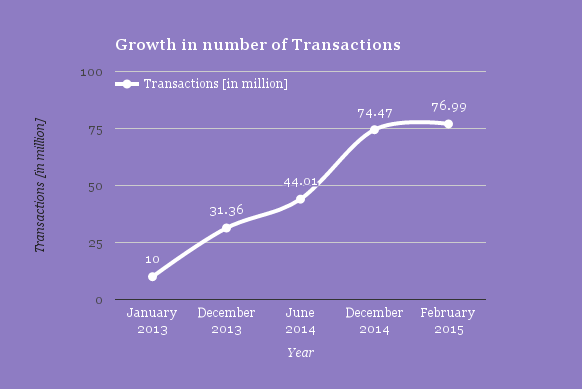 The Rise Of Mobile Money Services

The average monthly transactions made through mobile wallets stood at more than BDT 13,147.77 crore in 2015, which was just BDT 8,596.28 crore a year ago. According to Bangladesh Bank, there are approximately 3.1 crore mobile wallet accounts, of which 1.25 crore is active.

A study conducted by USAID found that the value of the average daily mobile money transaction is $47.44 Million and there was around 2.57 Million Average Daily Transactions [Feb 2015].

The staggering growth of mobile money service is now showing an early sign of taking over multiple aspects of transactions in our lives. Users, across the spectrum, reports that they find MFS services easy, safe and convenient and would like to use it for a host of other purposes including bill payment, various fees, savings, and shopping.

Competition is also heating up in the space. Although bKash dominates the market with 58% market share, other competitors are also working harder. DBBL mobile banking now accounts for 16.6% of the market share whereas mCash by IBBL has a market share of 8.5% followed by uCash.

Mobile has incredible potential in Bangladesh. Smartphone penetration is growing rapidly making it a ubiquitous device and handing enormous power to common people. Traffic from the mobile devices to local websites has already surpassed desktop.

On the other spectrum, cash on delivery accounts for almost 90% of ecommerce transactions. There is a growing demand for convenient digital payment options. There is no doubt that mobile money, with some changes in the form, will take this space in the near future.