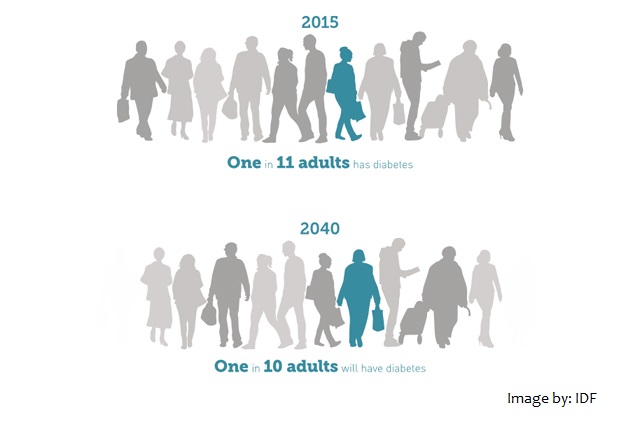 The State Of Diabetes In Bangladesh

Universally, Diabetes is one of the fastest growing and deadliest diseases. According to International Diabetes Federation’s Diabetes Atlas, there are 415 million people with diabetes in the world. The number will rise to 642 million by 2040. Globally, 1 in 11 adults have diabetes and whopping 12% of global health expenditure is spent on diabetes.

In the South East Asia region, the scenario is equally bleak, if not more. 8.5% of the population in the region have diabetes which about 78.3 million people. Half of this population, 52.1% don’t know that they are carrying the deadly disease. In 2015 alone, the region saw 1.2 million death caused by diabetes which is second among all seven IDF regions. In 2015, the region spends 12% of its healthcare budget on diabetes.

Back in 90s and 2000s, diabetes was not a prevalent disease in Bangladesh. But it grew swiftly after 2000 and it is now one of the fastest growing diseases in the country. Part of the reason, of course, insufficient attention from the policymakers and government during its early days that paved the path for the disease to spread quickly.

Despite the growing number of diabetes patients, awareness about the disease and treatment for those who are affected both are subpar. Half of the affected people don’t even know they have diabetes and a very small percentage of them get treated.

Bangladesh has a disproportionately high diabetes population with more than 7.1 million, 8.4% or 10 million according to research published in WHO bulletin in 2013, of the adult population affected by the disease. The number will be 13.6 million in 2040. Nearly half of the population with diabetes, 51.2%, don’t know that they have diabetes and don’t receive any treatment.

Bangladesh is home to a 161 million population, according to the latest census report. During 90s, the country has a relatively low diabetes affected population. In 1995 is was only 4% which grew to 5% in 2000 and 9% in 2006 to 2010. According to the International Diabetes Federation, the prevalence will be 13% by 2030.

According to a report published in WHO Bulletin in November 2013, there is a quite significant correlation between age and diabetes. Older people were more likely to have diabetes. A greater number of affected population were educated and working and more likely to come from affluent family with 40.7% came from the richest quintile, whereas 12.7% came from the poorest quintile.

The report also said that, urban people are slightly more prone to diabetes than the rural people and that 56.0% of affected people did not know they were carrying the disease and only 39.5% were receiving treatment regularly.

The most alarming news is that a growing number of children and young people are developing diabetes which a matter grave concern for any country.

Diabetes in Bangladesh is affecting young people and is causing disability, loss of income and early death. About 12% of households either borrow money or sell household assets to pay for diabetes treatment, said a report published in WHO Bulletin in 2013.

Diabetes is a costly disease. While it takes toll on individual health, it is also an economic burden for a country. As the number of people affected increase, healthcare expenditure also rises. Although it is difficult to measure economic cost of diabetes other than expenditure but it can’t be denied that an unhealthy population is more a burden than the resource.