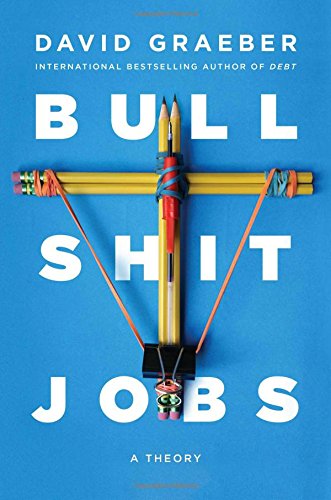 The Rise of Useless Work

An astounding number of people don’t enjoy their work. In fact, they hate their jobs. A phenomenon that has given rise to depression and unbridled consumerism. What people don’t find in their work, joy, and meaning, they try to find elsewhere by consuming and spending mindlessly. The rise of technology was supposed to free us, reduce our work hours, and allow us unlimited free time to pursue our passions and dreams. Unfortunately, the opposite has happened. Society and corporations have invented ever more new types of meaningless jobs and we have to spend longer and longer hours doing things that don’t make any sense and that we don’t find useful.

Anthropologist David Graeber explains the rise of this phenomenon in his 2018 book Bullshit Jobs: A Theory. Graeber roughly defines a bullshit job as one that would make no difference in the world, was it eliminated. Moreover, a bullshit job feels meaningless to the person doing it. They can’t think of a valid reason for their job to exist, but they will never say so publicly for various reasons. I found the book profound. Because it is true and so many of us today are purely doing the work that needs no doing. The experience is soul-crashing for many.

Everyone is familiar with those sort of jobs that don’t seem, to the outsider, to really do much of anything: HR consultants, communications coordinators, PR researchers, financial strategists, corporate lawyers, or the sort of people (very familiar in academic contexts) who spend their time staffing committees that discuss the problem of unnecessary committees. The list was seemingly endless. What, I wondered, if these jobs really are useless, and those who hold them are aware of it? Certainly you meet people now and then who seem to feel their jobs are pointless and unnecessary. Could there be anything more demoralizing than having to wake up in the morning five out of seven days of one’s adult life to perform a task that one secretly believed did not need to be performed—that was simply a waste of time or resources, or that even made the world worse? Would this not be a terrible psychic wound running across our society? Yet if so, it was one that no one ever seemed to talk about. There were plenty of surveys over whether people were happy at work. There were none, as far as I knew, about whether or not they felt their jobs had any good reason to exist.

This possibility that our society is riddled with useless jobs that no one wants to talk about did not seem inherently implausible. The subject of work is riddled with taboos. Even the fact that most people don’t like their jobs and would relish an excuse not to go to work is considered something that can’t really be admitted on TV—certainly not on the TV news, even if it might occasionally be alluded to in documentaries and stand-up comedy. I had experienced these taboos myself: I had once acted as the media liaison for an activist group that, rumor had it, was planning a civil disobedience campaign to shut down the Washington, DC, transport system as part of a protest against a global economic summit. In the days leading up to it, you could hardly go anywhere looking like an anarchist without some cheerful civil servant walking up to you and asking whether it was really true he or she wouldn’t have to go to work on Monday. Yet at the same time, TV crews managed dutifully to interview city employees—and I wouldn’t be surprised if some of them were the same city employees—commenting on how terribly tragic it would be if they wouldn’t be able to get to work, since they knew that’s what it would take to get them on TV. No one seems to feel free to say what they really feel about such matters—at least in public.