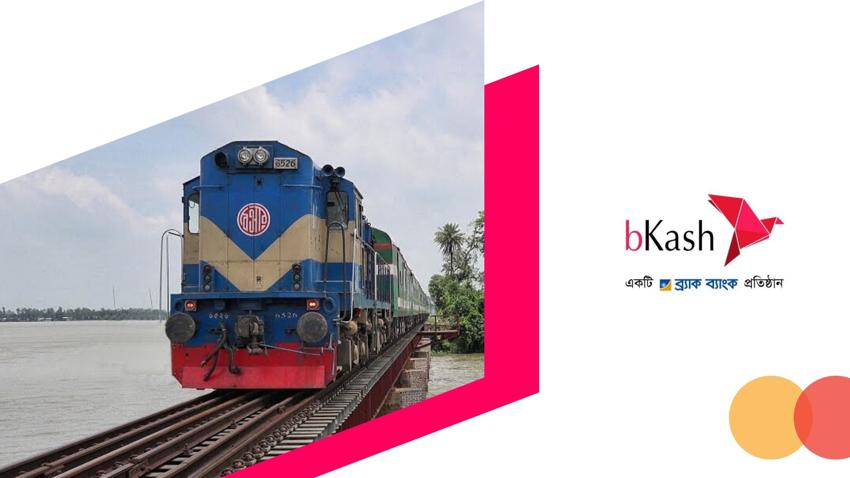 bKash has added a new service to its app - you can now directly buy a train ticket from bKash app without leaving the app. A development with many meanings.

The process is simple - download the bKash app, go to the ticket option, click on the icon, choose train ticket, give your details, make the payment, you are done and ready to go wherever is your destination.

A development with many meanings. This is an intriguing development that has indications for what bKash could pursue in the coming years. It is very well possible for bKash to bring all types of ticketing services on to its app and it could easily happen with many other services.

In fact, at the risk of being a little speculative, the scale of bKash and its rapid rise in the digital payment space makes it the only viable candidate in Dhaka’s tech ecosystem to become a superApp.

bKash as a superApp. If you pay attention, bKash has already done some work in this direction.

If you consider a Superapp, there are certain conditions that enable a digital platform to pursue such an ambition.

One, a large enough user base that uses your product daily and you have a direct relationship with your users- demand aggregation.

Two, an underlying infrastructure that connects one service with others - the necessary condition for selling one more service using the same infrastructure and at zero marginal cost.

Three, decreasing acquisition cost and a multi-sided market with certain network effect and inherent incentives for every party who participates.

bKash fulfills all these conditions.

A large enough user base that uses your product daily and you have a direct relationship with them - demand aggregation. bKash has a huge user base who use its service every day, unmatched by any other digital service in Bangladesh.

The company has been pushing into mobile payments for a while now. Although digital mobile payment market in Dhaka has a long way to go, you could easily bet that bKash currently leads the market. If some major competition does not come into the market unlike India, bKash is likely to dominate the digital payment as well.

If you consider, mobile as the key factor for an app, bKash has the largest user base in Bangladesh and is well ahead of any other digital services player such as Pathao or Shohoz or Sheba. Since bKash has aggregated a huge customer base, it could generate and thus control for many other products.

For example, bKash just added train tickets on its platform and it could safely be said that bKash would sell more train tickets than any other platforms who sell train tickets. It means it only makes sense for the Bangladesh railway to work with bKash and sell tickets through bKash.

This hypothesis could be applied to every other service.

Two, an underlying infrastructure that connects one service with others - the necessary condition for selling one more service using the same infrastructure and at zero marginal cost. bKash does not have to incur any more cost than it already incurs in order to sell train tickets or any other product for that matter.

It has the underlying infrastructure, which is mobile payment, that connects every other service. There is no extra cost for selling yet another service or product.

Three, decreasing acquisition cost and a multi-sided market with certain network effects and inherent incentives for every party who participates.

The advantage of being a demand aggregator is that you don’t essentially need to spend much in acquiring customers for yet another new service. The cost is basically in adding the service and then building a bit of awareness.

Not a new thing

Apart from that bKash app has a row entitled suggestions where you could see icons of a host of other websites and apps.

These apps are not hosted within bKash app. When you click on one of the icons under suggestions, it takes you to the designated website of that icon. But bKash could as well host all these apps within bKash and allow customers to use them without ever leaving the bKash app.

Then there is another row that is for bKash promotional offers with different brands. Clicking on these icons again takes you to the respective websites of the brands. But there are some brands for which bKash takes you to a subdomain URL titled bKash.companyname.com. It looks like an interesting experiment.

There are many paths to a superapp.

bKash could simply host third-party apps on its platform which it has been doing in a way for a while now. In that way, people would not have to download any other app and can simply get everything done using bKash app.

That’s more of a platform approach and the return bKash gets is eventual in nature and is unlikely to be greater than what other apps get in combined. However, it should make life easier for consumers and it is a fairly simple thing to do. It would not be a surprise if bKash moves into this direction in the short run as its clout in the payment market grows.

The second approach would be working with brands and independent sellers to offer storefront on bKash much like what it did with Bangladesh railway.

bKash becoming an everything app has its own challenges. While bKash can very much become an everything app, as you may understand, this article is partly intellectual speculation. Because it is hard to predict accurately whether bKash would move into other areas of the digital economy using the power of payment. That being said, I would redundantly predict that it is very much feasible for bKash and is very likely to happen.

In the case bKhas takes on the opportunity, the immediate challenges are three:

2) if bKash follows path two, in that case, it puts bKash in competition with all other digital marketplaces where bKash is a payment processor. How bKash reconciles with these dichotomies is going to be important.

3) Then there are likely to be regulatory challenges where an essentially financial services company playing an increasingly important role in commerce. bKash could either build a separate business for the bKash platform where it would explore digital services or it could merely host apps with a view to making life easier for consumers.

At the same time, this is an interesting development for both entrepreneurs and regulators. Digital allows companies to aggregate and build large scale platforms that encompass multiple verticals and allows one company to accrue unparalleled power.

This has impact on multiple levels. For entrepreneurs, it is an opportunity to build huge companies. At the same time, for companies who are not aggregators, it is a competitive nightmare. For regulators, how do you design policies and regulate these companies is an interesting question to answer.