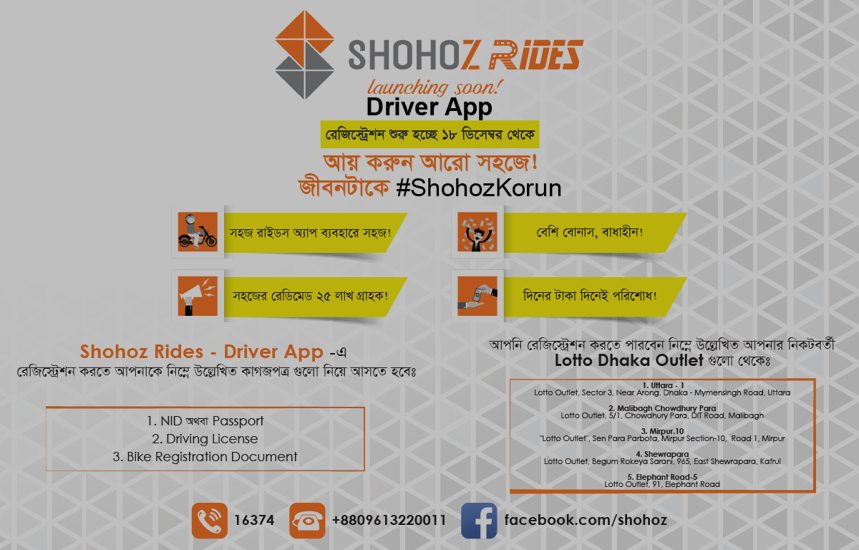 Shohoz Makes A Necessary Move And Shohoz’s Search For Moat

Shohoz has made a necessary move, finally, the company has announced that is is going to launch Shohoz Rides, its ride-hailing service, soon. It has not specified any date for the launch yet, however, registration for bikers is open now and anyone can register as driver visiting Lotto outlets in different parts of the city, an utterly inconvenient proposition for interested drivers.

While this announcement has raised some interesting questions in Dhaka’s tech community, I believe this is an important, in fact, an absolutely necessary move for Shohoz. More on that in a moment.

Theoretically speaking, Shohoz is a logistics company at its core, at least it is for now. It does not sell tickets, it enables customers to get tickets without visiting ticket counters for bus, movies, launch and in the future many other things. It does this either electronically or by delivering ticket physically to customers doorstep in collaboration with owners of buses and other services.

In the process, it makes your life easy and builds an intermediary relationship with the customers and disintermediate ticket counters of buses and cinemas and launches from customers. This disintermediation of service providers' own distribution channel is where Shohoz’s success lies. When it manages to build a direct relationship with end customers it becomes indispensable for the services providers for selling tickets.

Shohoz in a sense is an aggregator and its power lies in its ability to build and control relationship with customers and thus distribution. Customers go to Shohoz because they can buy any ticket from one place and service providers rely on it because it controls customer interaction. That’s the name of the game.

Because when Shohoz’s business case lies in building and controlling customer interaction with the ticket sellers or service providers and disintermediating their own distribution channel replacing it with Shohoz website or app, ride-hailing services in Dhaka threaten this central proposition of Shohoz by building and controlling that same interaction with that same customer, meaning any ride-hailing business that offers ticketing or delivery service - and almost all of these ride-hailing services in Dhaka plans to get into ticketing today or tomorrow - disintermediates Shohoz destroying its core value proposition. Shohoz can’t allow that to happen. That’s why when Shohoz announced its ride-hailing, I was not surprised at all because its success in ride-hailing will save its ticketing business.

From Walton’s ‘Made In Bangladesh’ phone, Walton’s Moats, And Why Walton Is A Hugely Underrated Company

“Every great business invariably builds competitive moats around its business. This is where Symphony is struggling today.

This is where Walton is different and I think the company is better positioned. Walton has consciously invested in building a brand image and this is exactly why I was surprised to see Walton launched its first locally manufactured phone without much fanfare. I would even argue that this was a wasted opportunity for the brand.

Walton has a long way to go, there is no denying to that. But I would like to argue that it has laid the foundation out well.

From Warren Buffet: “In business, I look for economic castles protected by unbreachable ‘moats’.”

The idea of moat came from the old days when a castle was protected by moats that circled it. The wider the moat was the protected the castle was against attacks of enemies.

If you are a modest student of history you know how importantly kings and military minds of the past treated a moat.

For a business, it is the same. Moats protects your business from competition and changes in the market and ensure sustainable profits.”

I would argue that getting into ride-hailing is an absolutely necessary move for Shohoz not because it is a lucrative business but because it will enable the company to protect its existing business. It is a moat.

On the top of that, Shohoz enjoys certain leverage being an online ticketing platform that includes: 1) its existing infrastructure, 2) relationship with various service providers including business and cinema hall owners 3) and most importantly with its customers who have been using its service for past few years.

While it will still be a tall order for Shohoz to break into the already saturated ride-hailing market in Dhaka, it does have certain leverage which it already flaunted on its ride-hailing driver registration announcement that, it has already 2.5 million existing users ready to be served. This will certainly be an incentive for many drivers to try the platform out, but I don’t think it will be enough a motivation for the drivers.

While it will be challenging for Shohoz to build a ride-hailing business given the timing in the market, I don't think it is that late yet and it is absolutely critical that Shohoz invests in ride-hailing.