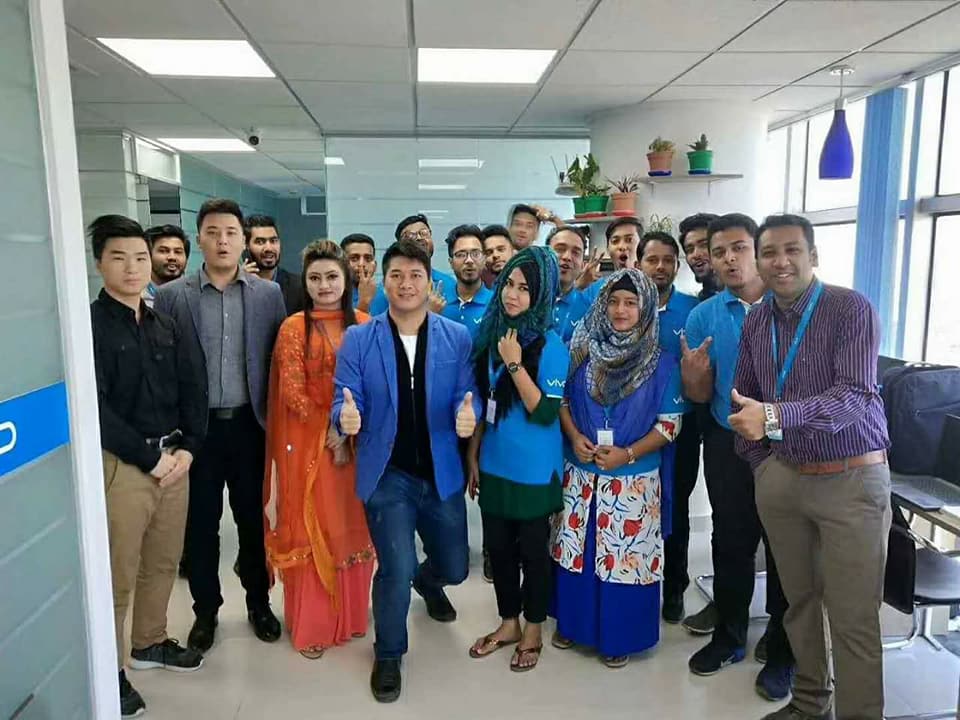 Vivo, the Chinese smartphone maker, has quietly launched in Bangladesh last week. Vivo joins a growing band of brands entering Dhaka’s mobile phone market which, according to IDC, is the 6th largest mobile phone market in the world. The company in a Facebook post on December 6:

“Finally vivo is in Bangladesh !!!
1st Day of Sale !!!
Your Face is the New Fingerprint! New Password! New Pattern!
Smarter Unlocking with your face, 24MP selfie, Full View Display
Just cheer up together:
V7+, worthy to own it to enjoy the ultimate joy !
Love vivo, love Bangladesh!”

Vivo was founded in 2009 in Dongguan, Guangdong, China. The brand uses Hi-Fi chips in its smartphones, has developed a Vivo App Store, iManager, and a proprietary Android-based operating system called Funtouch OS.

Although Vivo is not as well-known as other Chinese phone makers such as Huawei, OPPO, Xiaomi, Oneplus, which is owned by OPPO and interesting OPPO and Vivo shares the same parent company BBK Electronics, in Dhaka, but the company has been seeing a steady growth in many markets including India where it ranks third among all mobile phone brands. Research firm IDC ranked the company number six in its 2017 Q2 mobile phone brand ranking.

Vivo started its international expansion in 2014 and now has operations in over 100 countries. The company has got into a handful of high profile sponsorship deals over the past several years that has helped it build brand awareness quickly in many markets. The company sponsors IPL in India and also has entered into an agreement with FIFA as an official partner for FIFA upcoming world cup.

Bangladesh: A growing market and a competitive one

Consumer tech market has been seeing a steady growth in Bangladesh over the past few years. As I mentioned earlier, research firm IDC suggests the country is the 6th largest mobile phone market in the world.

While local brands Symphony and Walton have been dominating the market, both brands are now facing intense competition from a host of new players. In the last one year, both companies lost significant market share to new players, particularly Chinese companies, and combined smartphone market share of two companies came down to 39% in 2017H1 from what was 55% in the same period of 2016.

Another Chinese brand Huawei has been seeing a fast growth in Dhaka. From Huawei Continues To Grow In Bangladesh:

“Huawei, the China-based 3rd largest smartphone brand in Bangladesh, has reported an unprecedented 232% inter-annual growth in sales between 2015 and 2016.

Although late to enter the market, Huawei has managed to build a strong brand image among fierce competition with the likes of Samsung, Symphony, and Walton in Bangladesh. Based on a report published by the Society for Consumer Research on November 2016, this Chinese Telecom company now possesses 14.5% of the total handset market share in respect of its volume and 19.1% with regard to its value in Bangladesh.

Bangladesh has been going through surprising changes in mobile handset usage in the past few years; particularly from 2013 when the market trend was fairly disrupted by an upsurge in smartphone sales. However, despite that, customers still remain fairly price sensitive in terms of purchasing quality handsets.

In order to tackle these challenges and competition, the company is focusing on manufacturing hi-quality products at more competitive prices while ensuring meaningful innovation.”

On the other, local consumer tech manufacturer, Walton has just rolled out its first made in Bangladesh phone this month which I suspect will give the company significant competitive advantage in the market. From Walton Makes History, Walton’s Moats, And Why Walton Is A Hugely Underrated Company:

“Competition in Dhaka’s mobile market is growing rapidly, as I already mentioned. A host of Chinese brands is increasingly applying aggressive strategies in order quickly gain market share. It can safely be predicted that competition will intensify in the coming years as more brands enter the market. Just week we saw a new brand to enter the mobile handset market.

This warrant for a new kind of strategy from brands that want to capture market share and retain it. I would argue that building proper competitive moats around brands will be increasingly important in the consumer tech market and I would also argue that Walton is best positioned among all the brands, not only local ones, as far as moats are concerned.

This is the point why I argued at the beginning of this piece that Walton’s launch of locally manufactured smartphone should have given much more attention. And this is why this is such an important move for Walton.”

Given all these developments, I can’t wait to see what happens in 2018.