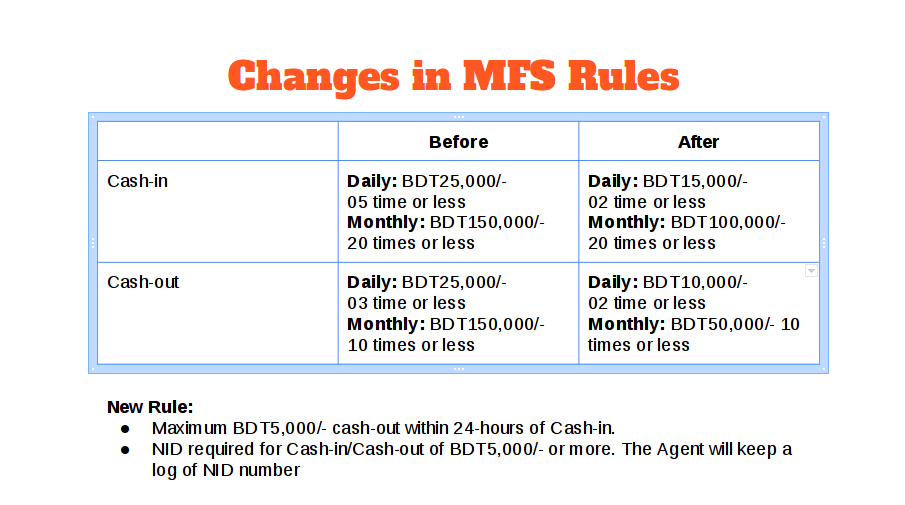 Bangladesh Bank has cut down transaction ceiling of personal accounts of Mobile Financial Services (MFS) significantly, in a bid to combat illegal financial transaction -mainly foreign remittance through Hundi. The move will supposedly make e-commerce payment scenario more complex and reduce the attractiveness of MFS as an option for online transaction.

The regulator issued a circular to scheduled banks yesterday and asked for immediate compliance.

“MFS is a fast growing service which has gained popularity among different social class, especially among the low-income group. However, some miscreants are misusing this service, which is harmful to the society and the country”, the circular reads.

Before this new ruling, a personal account could cash-in maximum BDT 25000 and for not more than five times a day. This has been slashed down to BDT 10000 and for maximum two transactions a day. Monthly total cash-in limit has been set at BDT 100,000 from earlier BDT 150,000.

Cash-out limit has also been brought down to maximum BDT 10,000 and the user can perform two cash-out transactions a day only from earlier BDT 25000 and three times a day. Monthly cash-out has got a new maximum limit of BDT 50000 down from earlier BDT 150,000.

Besides, a person can not cash-out more than BDT5,000 a day after getting cash-in in the first 24 hours. Agents will mandatorily keep track of NID number of the payer who does cash-in for BDT5,000 or more despite the fact that all mobile numbers are now registered biometrically against NID. The central bank has also instructed the MFS provider banks to cancel agency of non-compliant agents in an expeditious manner.

Given the new limit and the fact that most of the e-commerce payment are done through MFS, online transaction is set to get a new blow as the customer will face difficulty in making payments. Besides, few of the e-commerce and f-commerce owners now have merchant accounts but most of them used to take payments in their personal account, which now will be almost impossible to continue.

Fariza Binte Bulbul, the owner of Modest Collection, a growing modest fashion e-tailer, noted that this new move by BB will make online payment process complicated and pose newer challenges to young entrepreneurs. “We are a bkash merchant and hope that this won't be an issue for us. However, the government should think twice before taking decisions that may affect young entrepreneurs badly“.

Fariza rightly pointed to vast majority of online sellers who do not have merchant account and take payment to their personal MFS account. However, this will help streamline the payment process as online businesses will now be forced to take merchant account for taking payment, which will, in turn, ensure transparency of the whole process, another industry insider noted.

The move from the regulator came in a time when remittance growth is dipping down. In 2016 remittance growth was down by 11% compared to the remittance inflow of 2015, while Bangladesh has sent 0.76 million people as manpower – highest in last eight years.

Given the paradoxical scenario, expert has opined that negative growth in remittance inflow can be attributed to sluggish global economy and increased use of Hundi. Besides, the cost of sending money through banking channel has also increased in 2016, compared to 2015. This has also contributed to poor remittance growth and MFS has become a boon to Hundi operators as it gave them a tool to disburse money in real time.

“We have tightened our policy to discourage illegal transaction using MFS”, Shubhankar Saha, a spokesperson of BB told The Financial Express.

Bangladesh has become a role model in financial inclusion using MFS. Transaction through MFS amounted to BDT 2.11 trillion up to November 2016, which is 37% higher than the same period of 2015.