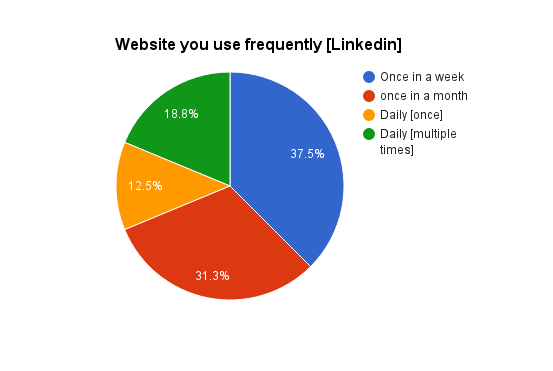 Readers Use Google, Gmail, Facebook Multiple Times A Day, But Linkedin, Prothom Alo, DS, and FE Not So Often

The Future Startup’s readers use Google, Gmail, and Facebook multiple times a day, our latest reader survey showed. On the other hand, though, a significant number of readers said they use Linkedin, Prothom Alo, DS, and FE infrequently.

The survey carried out in August also showed that social networking takes up a significant portion of users time online followed by reading about professional articles, news consumption, research/education, communication, and professional use.

The survey, first of its kind, aims to understand how our readers spend their time online and what are the mediums and platforms they use frequently.

A staggering 81.3% readers said they use social networking more often compared to 12.5% of those who said they use the medium less frequently. On the other hand, only a meagre 18.8% said they spend their online time for reading news mainly while 37.5% said they follow news less often.

Google and Facebook are the two most used platforms among our readers. 93.8% users said they use Google multiple times a day compared to a meagre 6.3% who said they use only once in a day. However, the conclusion is simple: all of our readers participated in the survey use google daily.

On the other hand, the same number of users, 93.8% use Facebook multiple times a day except for 6.3% of readers who said they use it once in a week, which makes Facebook a little less significant to Google.

Financial Express does not have a pretty website and it seems, the newspaper also does not care much about its online presence. The numbers showed a similar result. Only 6.3% readers said they use FE daily, 25% said they go to the site once in a week and a whopping 68.8% said they read the portal once in a month.

While many people already announced the demise of Gmail, our survey indicates the medium is the third most used tool. 6.5% readers said they use it multiple times a day and 31.5% said they use it daily.

The numbers don’t look good for Linkedin, only 18.8% readers said they use Linkedin multiple times a day and it is 12.5% for daily users. A significant, 31.8% readers use the platform once in a week.

No newsletter subscription? You’re missing out.
Join the tech and business leaders of Bangladesh who rely on Future Startup for long-form and in-depth reporting on business and tech industry of the country.