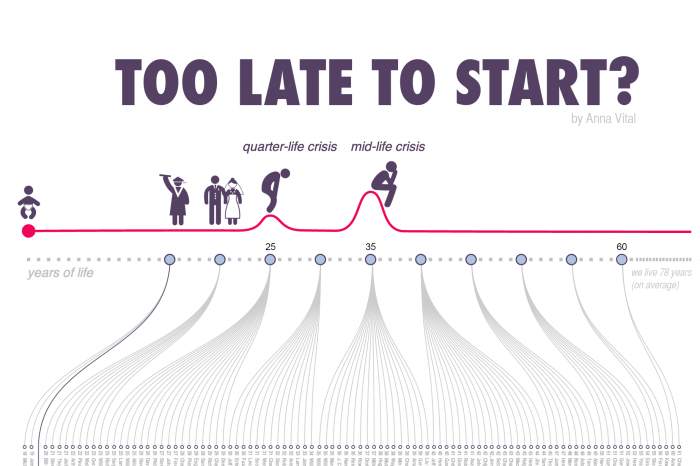 What Is The Optimal Age For Entrepreneurial Success?

The myth of 20-something drop-out success
"Facebook, Apple, Google, Instagram, Snapchat and Box all have one thing in common: Their founders were in their 20s when they launched," wrote Bruno Aziza in a TechCrunch post, "The amount of press you’ll read about these companies will have you believe that youth is a required ingredient for startup success."

Press is often misleading. They what sells. Hence, the view on young startup successes is largely based on the perception and expectation. There are examples of successful 20-something and college dropout founders and at the same time of those who started late in life and followed a more conventional path.

Aziza continues: "That might appear true, but if you look at actual data on this topic, you’ll find that age is less of a driver to entrepreneurial success than experience, and that the average age of a successful startup founder with more than $1 million in revenues is in fact 39."

The Optimal age for startup success
Studies suggest that, a significant number of the most successful entrepreneurs started their business after 35 and this is true for recent times as well. While press often promotes the idea of early success, it has been found in multiple observations that majority number of the most successful founders are above 30 and have prior experience of working at big corporations.

Too late to start? Not at all
In Bangladesh, under 30 successes are rare. However, a trend is developing in recent times: young people are starting companies early and becoming impatient. But it does not imply that you can't start one if you are not under 30. You definitely can and apparently, average chance of success is better for late bloomers.