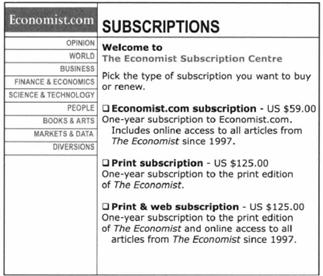 Psychology of designing communication message: it’s not what you tell but how you tell

The idea of psychological pricing tells us that trick works and human brain does have default limitations; though wrong trick played wrongly may backfire sometimes. Monir Buyian in his piece stated that: "an explanation for the rationale of odd/psychological pricing is that people have only a limited capacity for storing information. They store only the more valuable message, the first digit of a number."

This very principle, the limitation and built-in irrationality of human brain, should be considered when you are designing an advertising message or a pricing strategy or a message to convince someone. To have an illustration of this communication trick we can go back to my previous article on Economist’s pricing, originally cited by Dan Ariely in His brilliant book Predictably Irrational.

The picture shows us that; one of the three prices, option 2: print subscription for $125, enlisted in the advertisement is completely irrelevant and make no sense. And if we look into the third price that also asks $125 for print + online access, then it’s apparent that nobody is to choose the second option. So, question comes why the second option, if nobody choose it? We need to go a bit further to see reasoning. And if we see the difference of our decision with and without second option then it becomes clear. It influences one’s choice. Experiments shows, described by Dan Ariely, that people choose third option, $125, when they are given with three options instead first option while given with two, first option and last. The lesson is that presence of middle option; $125 for print only, makes us to feel that last one is the best option where we can enjoy two packages, online & print, in a single offer.

Another research, also described by Ariely on decision making, tells us about organ donation is several countries in Europe and America shows that there is a significant disparity in the rate people participate in organ donation program even in countries with similar culture and system. In an study to find out the underlying cause researchers found that this rate has nothing to do with culture or anything else but the ‘organ donation form’ itself. It has been found that the countries with higher donation rate have a different description for their organ donation campaign while same is true for opposite country. The description looks like below:

The countries with higher donation rate ask: If you don’t want to join an organ donation program please check the box.

The countries with lower rate ask the same thing in a different way: If you want to join an organ donation program please check the box.

Design and presentation of a particular communication message does have strong influence on how it will be perceived and received by the audience. A clear understanding of conspicuous aspects of human brain can give us a heads on approach to make a campaign right.