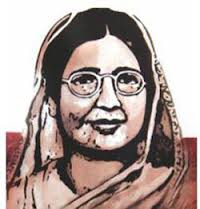 Remembering Begum Rokeya: a trailblazer in the rights, education and modernization of Bengali Muslim women.

We are about to celebrate ‘International Women’s Day’ on March 8, with a vision to ensure a more equal world regardless of gender, to ensure Justice, dignity, hope for daughters everywhere. In this very moment we remember our very own and beloved writer, women rights activist and educationist, Rokeya Sakhawat Hossain (1880-1932), lovingly known as Begum Rokeya-a true genius and trailblazer who celebrated the path of freedom for the Muslim women in Bengal. She is often considered to be Bengal's earliest and boldest women right activist and best woman writer as well. Mohitlal Majumdar (1888-1952), once described her as the embodiment of the soul and conscience of her age.

The role of Begum Rokeya in the life of Muslim women of Bengal is so immense that Shamsun Nahar Mahmud (1908-64), biographer and associate of Rokaya, described her as a ‘spider mother’ and famously proclaimed that:

“The fate of the Bengali Muslim women has changed radically within the space of half a century, and there is no way to deny that this benevolent woman played the most significant role behind it.”

Rokeya was brought up in the strictest form of conservatism practiced by elite Muslims of the time. Consequently, she became the fiercest critic of the system in later years that gives us with the immense insight she had about life and about her time which we see in her scathing remark in the essay, “Bengal Women's Educational Conference” (Bongiyo Nari-Shikkha Samiti). Her understanding and insight, regarding Islam and mere societal dogma, give us a mediation to think about the so called opposing stand of Islam and education of girls. Instead of blindly blaming Islam for the ignorance and unholy conservatism of that time Muslims Rokeya quoted from the history to argue in favor of the importance of the education of Muslim girls:

Although Islam has successfully prevented the physical killing of baby girls, yet Muslims have been glibly and frantically wrecking the mind, intellect and judgment of their daughters till the present day. Many consider it a mark of honour to keep their daughters ignorant and deprive them of knowledge and understanding of the world by cooping them up within the four walls of the house.

Again In “Bengal Women's Educational Conference,” Rokeya adds in her argument, in a similarly upset tone which at a time gives us a chance to pick inside her knowledge about the state of women in India, her passion to free Indian women and her relentless commitment to end what she started:

I have been crying for the lowliest creature in India for the last twenty years. Do you know who that lowliest creature in India is? It is the Indian women…. There are people also who feel for animals, so we see animals' rights groups everywhere. If a dog is hit by a car, we hear an outcry in the Anglo-Indian media. But there is not a single soul in the whole of the subcontinent to mourn for incarcerated women like us.

In 1926, in her address to the Bengal women's education conference, Rokeya strongly condemned men for withholding education from women in name of religion. Her poignant assertion gives a glimpse of the deepness of her thought and idea and pervasiveness of her understanding. Her comment reminds us the very inadequacy of thought and practice of that time Bengali Muslims and also her ability to accept that religion is not an opposition to women rights but social dogmas in the name of religion.

"'The opponents of the female education say that women will be unruly...fie! They call themselves Muslims and yet go against the basic tenet of Islam which gives equal right to education. If men are not led astray once educated, why should women?

The most beautiful part of Rokeya’s story is not her rhetoric and intellectual poignant but her action. She was not only an intellectual force of women rights movement but also an activist- a combination we seldom see. Brought up in a conservative family environment, and without any formal education, Rokeya's life was meant for another ordinary Muslim housewife. But breaking all shackles, she grew up to become a writer in both Bengali and English, an activist for the freedom of Muslim women in Bengal and an educationist. In March 1911, she set up a school named Sakhawat Memorial School for Girls, for the purpose of educating Muslim girls. Rokeya, who had never stepped into a school in childhood, became a trailblazer in the education and modernization of Bengali Muslim women.

Today when we are celebrating International Women’s Day and also celebrating continuous emancipation of woman as an entrepreneur in this country we must look back and remember this extraordinary woman for her contribution and for setting the stage up for the Muslim women of Bengal.

Complement with Face to face with Samira Zuberi Himika, Founder & Managing Director, ‘team engine’, Face to face with Selima Ahmad, Founder & President, Bangladesh Women Chamber of Commerce and Industry, “Don’t let anyone tell you can’t do it – not even you”: Q & A with Maya Founder Ivy Huq Russell, The Rise of Women Entrepreneurs: An unlikely conversation With Sabila Enun of DCastalia, & Our goal is to alleviate poverty in Bangladesh~Shaba Amin, Founder, PFF