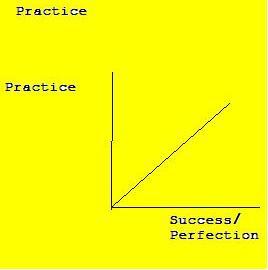 The 10,000 hours rule of success and perfection

“Practice means to perform, over and over again in the face of all obstacles, some act of vision, of faith, of desire. Practice is a means of inviting the perfection desired.”- Martha Graham

In his book “Outliers: The story of success- Malcolm Gladwell mentioned this experiment:

“In the early 1990 the psychologist K. Anders Ericsson and along with two of his colleagues conducted an experiment on school violinist of Berlin’s Elite Academy of Music. With the help of academy’s professors, they divided the school’s violinists into three groups. In the first group were the stars, the students with the potential to become world class soloists. In the second were those judged to be mere good. In the third were the students who were unlikely to ever play professionally and who intended to be music teachers in the public school system. All of the violinists were then asked the same question: over the course of your entire career, ever since you first picked up the violin, how many hours have you practiced?

They found that, everyone from all three groups started playing at roughly the same age. In those first few years everyone roughly practiced the same. But real differences started to emerge from the age eight. The students who would end up the best in their class began to practice more than everyone else. What led them by the age of 20 at their 10,000 hours practice quota.
Ericsson and his colleagues then compared amateur pianists with the professional pianists. The same pattern emerged. The armatures never played more than about three hours a week over the course of their childhood and by the age of 20 they had totaled 2 thousands hours practice. The professionals, on the other hand, steadily increased their practice time over the year and by the age of 20 they reached the milestone of 10,000 hours.

Ericsson’s research showed that there is nothing like “natural” talent nor they found the people who worked harder than everyone else, yet just did not have what it takes to break the top. Their research shows that once a musician has enough ability to get into a top music school, the thing that distinguishes one performer from another is how hard her/she practices. The people at the top work harder and harder and that’s it.”

After putting the examples of Beatles and Bill Gates, Malcolm suggests that all these great people practiced a lot and by putting statistics he proved that all their practice time crossed far more than 10,000 hours.