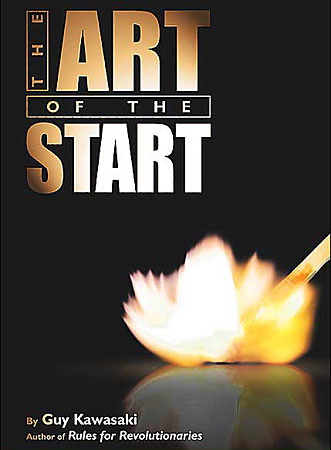 The Art of the Start

“Everyone should carefully observe which way his heart draws him, and then choose that way with all his strength.”

I just read a fascinating book named by “the Art of the Start: The Time-Tested, Battle-Hardened Guide for Anyone Starting Anything” written by Guy Kawasaki which attempts to explain in a better and understandably compelling way, at my best understanding, how one can start in a better way.

Guy Kawasaki is CEO of a Silicon Valley based firm named by garage.com, that assists high-tech startups to stumble on startup capital using the Internet. Earlier, Kawasaki was an Apple Fellow at Apple Computer, Inc. And one of the individuals responsible for the success of the Macintosh computer. He is also the author of another seven books: The Macintosh Way, Database 101, The Computer Curmudgeon, How to Drive Your Competition Crazy, Hindsights, Selling the Dream and Rules for Revolutionaries.

His "The Art of the Start" published on September 9, 2004. On the book Kawasaki attempts to explain that, the way we see starting something is necessarily flawed and he provided with number of GIST (great ideas for starting things) lists throughout the book on how to start better.

Kawasaki argues that one should create meaning instead of creating stuff and one should create mantra instead of crafting mission statement. His logic behind both arguments is-the best reason to start a business is to make the world a better place to live than anything else. And crafting a mantra over a mission statement gives your team the guidelines, spirit to run where mission statement is just a boring reading. As the way things are, we are moving fast towards a world where empathy will ultimately rule. From this point of view creating something with positive impact is a requirement of sustainability. And creating meaning means you are on the right track.

After defining one’s impact or meaning and developing a mantra Kawasaki says, now you go and get start it. Kawasaki argues that, the traditional way of pitching, planning, writing does not work rather one should start making something and start delivering it. There is no way of planning and starting a business.

Then writes put a term named MAT which is an abbreviation for Milestones, Assumptions, and Tasks. Writer explains that, one should set milestones that he has to meet eventually. Define assumptions builds into his business model and make list of tasks to be finished within time.

The most important lesson you can search out from the book is that, the only way of starting something is starting something. It says, many books on entrepreneurship asks typical question like, whether you can work long hour with a small salary? Or can stay working after being rejected many times? But they don’t work. One cannot answer hypothetical questions for a practical experience.

What Kawasaki says is that, nobody knows how he will respond to these kinds of situations. Talking and doing is not same. A person who is very strong in words can be worthless in works. So, there is no point of asking questions like the. Rather start and experience eventually you will know what you are capable of. There is no substitute of experience.