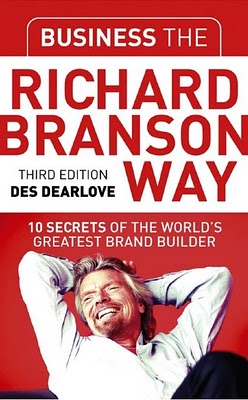 From the Business the Richard Branson Way

In the modern world of business, Richard Branson is an anomaly. In an era dominated by strategists, he is an opportunist. Through his company the Virgin Group, he has created a unique business phenomenon. Never before has a single brand been so successfully deployed across such a diverse range of goods and services. The distinctive red and white Virgin logo, it seems, is as elastic as Mates condoms – just one of the many products Virgin has promoted.

“Whenever I experience any kind of setbacks,” Branson observes, “I always pick myself up and try again. I prepare myself to have another stab at things with the knowledge I’ve gained from the previous failure. My mother always taught me never to look back in regret, but to move on to the next thing. The amount of time that people waste on failures, rather than putting that energy into another project, always amazes me. A setback is never a bad experience, just a learning curve.”

Branson deliberately targets markets where the customer has been consistently ripped-off or under served, and the competition is complacent. He delights in casting Virgin as the cheeky underdog, faster on its feet and nipping at the heels of big business.

According to Tim Jackson, author of Virgin King the unoffi cial Branson biography, Branson’s motto should be ars est celare artem – the art lies in concealing the art. This is the essence of the Branson management style, and the cornerstone of the Virgin empire.

His first proper business – a magazine called Student, was launched when he was just 16 years old – and was not a resounding success either. Then, something happened (and has kept on happening ever since). With little or no knowledge of pop music, Branson stumbled onto the idea of a mail order record company. Short of advertisements, he published his own ad in the magazine.

Look out of text book:

Branson has probably never heard of Michael Porter’s five forces– even though the Harvard Business School professor has been essential reading for business school graduates for more than 20 years. If he had, he would know that the airline business, the cola market and the UK fi nancial services markets – to name just some of the areas where he has successfully set up Virgin companies – are textbook examples of extreme competitiveness or high barriers to entry, and best avoided. (Asked how one becomes a millionaire, Branson replies that you start off as a billionaire and then open an airline.) That might have deprived us of one of the most colorful and dynamic business empires the world has ever seen.

On the other hand, Branson’s reaction to being told something is impossible is usually to regard it as a challenge. Porter’s analysis would probably have inspired him. It is precisely because Branson doesn’t read the business text books that he is so successful.

In an uncharacteristic reference to business school theory, the ideas of Gary Hamel and C.K. Prahalad in particular, in recent years Branson has distilled Virgin’s four core competencies. These are:

These are just few of awesome wisdom described in the book. If you want to dive your nose into Branson’s world of business wisdom get a copy soon. Happy reading.