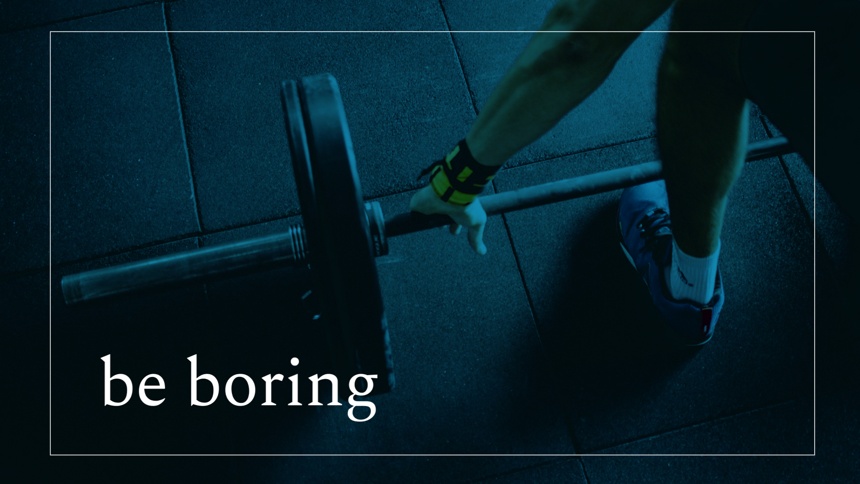 Most people distaste boring. Although it could be person-specific - what is boring to me could be fascinating to you, there are some defining qualities of boring such as it appears traditional, it requires commitment, it is hard, and it is nonglamorous. Solving a critical problem is boring. Executing an old method that works is boring. Getting a job done is boring. Following through and executing on an idea is boring. In all these things you simply need to sit, spend time, and get it done. These traits don’t help with our general tendency, which is we are always after what is new and trendy and exciting. However, while there are legitimate reasons behind seeking novelty, often boring is what makes things work. Sit steady, follow the process, and get it done.

The most important things in business and in life are boring. Selling things is boring. Maintaining relationships is boring. Building your product, fixing bugs, iterating the same feature, talking to customers - these all are boring tasks. In fact, the most substantial and long term trends are boring. For example, relentlessly pushing for ensuring superior customer service is boring but that’s what puts you ahead of your customers. Often we are excited about new things and new ideas but rarely pay attention to things that remain the same and could potentially change the trajectory of our business.

As Jeff Bezos says: “I very frequently get the question: 'What's going to change in the next 10 years?' And that is a very interesting question; it's a very common one. I almost never get the question: 'What's not going to change in the next 10 years?' And I submit to you that that second question is actually the more important of the two - because you can build a business strategy around the things that are stable in time. ... [I]n our retail business, we know that customers want low prices, and I know that's going to be true 10 years from now. They want fast delivery; they want vast selection. It's impossible to imagine a future 10 years from now where a customer comes up and says, 'Jeff I love Amazon; I just wish the prices were a little higher,' [or] 'I love Amazon; I just wish you'd deliver a little more slowly.' Impossible. And so the effort we put into those things, spinning those things up, we know the energy we put into it today will still be paying off dividends for our customers 10 years from now. When you have something that you know is true, even over the long term, you can afford to put a lot of energy into it.”

Boring is consistent. Boring does not change frequently. Boring takes persistent efforts. Doing a task with focus is boring. Writing this article is boring because I probably am missing out on more interesting things. But researching something more exciting or seeking something more interesting would not produce results. Sitting and writing for a few hours will produce an article.

Often we assume that novelty is better. A new approach, a new process, a new product, a new tool can solve our problems or produce a better outcome for us. As a consequence, we spend a lot of time developing a new approach or inventing a new tool. It feels good and exciting because when we are inventing new tools, it gives us a false sense of pride and progress. Pride feeds our ego and we enter into a self-fulfilling prophecy.

Almost always accepting the proven model and working on it and then improving it produces better results. But following a traditional model or an already proven model does not feed our ego. We don’t feel elevated and excited doing it but it is effective for getting things done. What is even more effective is iterating. If we take an existing model, work on it, iterate and improve it, it is even better. It produces results and takes us forward. But it is boring. Tradition has wisdom. That does not mean we don’t try to improve or invent. Similarly, it also does not mean that we shun a proven model just because it is traditional. If it works, it works.

The second aspect of boring that is relevant to our discussion is what I discussed multiple times in the past in Future Startup. It is with regard to finding startup ideas. We are always working too hard to find exciting ideas. Find the next big trend. But often startups are built in areas that are boring and complex. In boring and complex I wrote, borrowing from Charlie Songhurst, “Boring and complex – these are the two types of ideas that produce the greatest results in venture building. Albeit boredom and complexity are person-specific. Something which is boring to me could be immensely fascinating to you. The general rule of thumb here is that it is boring to the general population.” In the beauty of mundane: “one of the best approaches to finding solid startup ideas is looking into things that are mundane and overlooked. That almost nobody is taking seriously. Often treasures are hidden in the most unexpected of places.”

Boring could be the ultimate signal of productivity and importance. Often boring means you are on the right track, getting things done or doing important things and in a space with limited competition. Boring means there is immense potential to unearth.